American Medicinal Plants: An Illustrated and Descriptive Guide to the American Plants Used As Homopathic Remedies: Their History, Preparation, Chemistry, and Physiological Effects 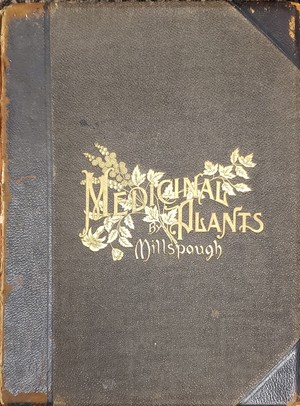 Charles Frederick Millspaugh
Considered to be the "bible" for botanists, this work has been selected by scholars as being culturally important. Charles Frederick Millspaugh (June 20, 1854– September 15, 1923) was an American botanist and physician, born at Ithaca, N.Y., and educated at Cornell and the New York Homeopathic Medical College. He received his medical degree in 1881 and practiced medicine in Binghamton, New York until 1890. From 1891 to 1892, he taught botany at West Virginia University. In 1894 he was appointed as the newly established Field Museum of Natural History's first Curator of Botany, a position he held until his death. From 1897 to 1923 he was also professor of medical botany at the Chicago Homeopathic Medical College and lectured on botany at the University of Chicago. Millspaugh conducted explorations in the United States and Mexico, the West Indies, Brazil, and other parts of South America, and was the author of American Medical Plants (1887); Flora of West Virginia (1896); Contribution I-III to the Coastal and Plain Flora of Yucatan (1895-1898); "Flora of Santa Carolina Island" (1923); and many articles in scientific and popular journals. He was a skilled scientific illustrator and artist, producing the majority of the illustrations for his publications. This book contains numerous colored plates of various plants. Includes Appendix, Glossary and Bibliography