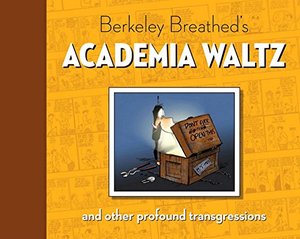 Berkeley Breathed
Berkeley Breathed is known as the creator of the wildly popular and influential comic strip Bloom County, and, in particular, for his most iconic character Opus. Over the course of a little more than eight years Bloom County was one of the best selling comic strips ever, winning Berkeley a coveted Pulitzer Prize. The artist went on to do two more sunday-only strips, Outland and Opus, as well as producing best-selling children's books and screenplays. But before Breathed began his storied career he was a (not so) humble college student at the University of Texas and a contributor to the Daily Texan newspaper where he wrote and drew political cartoons as well as... The Academia Waltz. Berkeley would go on to finance his college studies by self-publishing two paperback collections of AW, selling over 10,000 copies. The strip drew the attention of the Washington Post Syndicate which eventually began publishing a new creation by Berkeley... Bloom County. Many of the characters in the new strip originally appeared in Academia Waltz, most notably Steve Dallas. Now, for the first time - from the rarely seen archives of Berkeley Breathed - comes the nearly (we think) complete Academia Waltz!