Infinite Sea: The Second Book of the 5th Wave, The 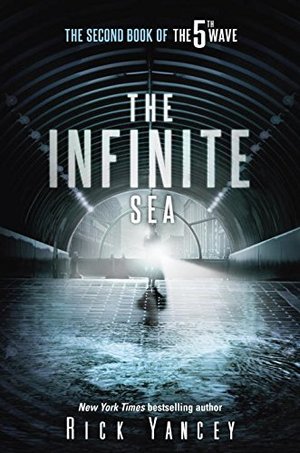 Rick Yancey
For Cassie Sullivan and the rest of Earth’s remaining human survivors, the situation was already desperate when the 5th Wave hit. It’s about to get worse. No one yet knows the depths to which Earth’s conquerorsthe Otherswill sink in order to rid the Earth of the human infestation, nor have they guessed the heights to which the human spirit can reach. Characters introduced in Book One will come to the foreand others will face the ultimate test. Readers will watch in awe as the Others give their answer to Cassie’s defiance.   Praise for The 5th Wave   Just read it.”Entertainment Weekly   A modern sci-fi masterpiece.”USA Today   Wildly entertaining . . . I couldn’t turn the pages fast enough.”Justin Cronin, The New York Times Book Review    Nothing short of amazing.”Kirkus Reviews (starred review)   Gripping!”Publishers Weekly (starred review)   Everyone I trust is telling me to read this book.”The Atlantic Wire

@bookaddictguide
Reviewed: 2017-12-07
Initial Impressions 10/5/14: 4.5 stars
Well just like The 5th Wave (which I read in one afternoon, just as a reminder) I was totally sucked in to The Infinite Sea. Rick Yancey apparently just has a way of sucking me into these books!!
I really enjoyed the whole thing from cover to cover (though the longer section at the end actually felt just a bit slower for me) but lots of good moments and twists and plot.
Really enjoyable and quite a thrill. Loving what is going on with this series.

Full review posted HERE on The Book Addict's Guide 10/29/14: Last year when THE 5TH WAVE came out, I actually had no interest in an alien story but once I heard the buzz, I ran out to the store, picked up the book, and when I started reading, I couldn’t stop. I finished THE 5TH WAVE in one sitting and absolutely loved the book. I’ve been waiting a while for The Infinite Sea to come out and once again, Rick Yancey totally hooked me straight away. If I hadn’t had to stop for food and sleep and work, I could have easily tore through this book cover to cover like its predecessor!

What really hits me the most about these books are the characters and the action. In THE 5TH WAVE, the readers are introduced to the core set of characters and they make a sincere connection, all the while just as unsure as the characters what’s going on with this wave of invaders and how they can possibly survive. THE INFINITE SEA starts off with just a big of a bang and right away I was anxious how the opening scene would no doubt affect the entire rest of the book. The action kicks off in high gear right from the start and I really felt like it carried me through the book. I couldn’t stop turning pages and I was totally riveted.

Whereas we spent a lot of time with Cassie and Zombie in THE 5TH WAVE, THE INFINITE SEA opens up to a larger range of POVs from some of the secondary characters, now in the spotlight. Cassie, Zombie, Evan, and Sam are still very much main characters, but Rick Yancey allows us into the minds of people like Ringer (who is known to be antagonistic — and I always love being able to see inside of the mind of an opposing force) and even characters like Poundcake. I feel like there was a mixed reaction to the slight shift from Cassie and Evan’s perspectives but I really enjoyed how the new perspectives really added another layer to the overall story. The characters who were once secondary step forward and really show how much they have to offer and how much they might change the entire plot of the series so I thought it was really interesting to see how the focus started to spread further than just the initial core main characters. There are still the same POV shifts from section to section which I’ve seen some readers still struggle with a bit, but I didn’t feel like they jumped around too much. Sometimes it does take a few sentences before you’re able to pin down whose POV you’re reading , but that really wasn’t something that bothered me, personally!