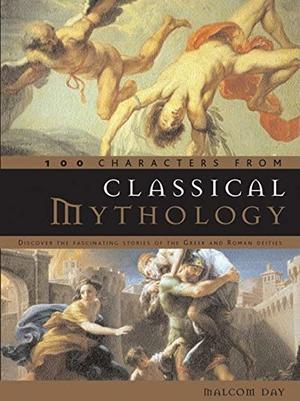 Malcolm Day
Dating back roughly 3,000 years, the gods of the ancient Greeks--and later, of the Romans--have figured prominently in legendry, poetry, drama, and the visual arts. But today's readers are often confused when they encounter the myriad names of those deities and try to understand their roles in mythology. This entertaining and mind-expanding book charts 100 of the most prominent characters from Greco-Roman mythology, including the primordial deities, the great gods of Olympus, and the shadowy inhabitants of Hades. Addressing universal themes such as love, jealousy, anger, ambition, deceit, and beauty, the stories told here make fascinating reading while they add significance to countless classical references in our civilization's literature and art. Author Malcolm Day profiles each god with a short, very readable summary of that personage's acts. He sets each deity's story within the larger context of a "family tree" that encompasses all major gods. Full-color illustrations showing memorable scenes from classical mythology include reproductions from famous paintings and photos of statuary. Separate chapters are devoted to: The Primordial Gods: Gaia, Uranus, Cronus, and others The Gods of Olympus: Zeus, Poseidon, Athena, Apollo, and others Descendants of the Titans: Iris, Nike, Helios, Eos, Atlas, and others Legendary Heroes: Jason, Oedipus, Daedelus, Paris, Helen of Troy, and others Figures from the Odyssey: Odysseus, Penelope, Circe, and others This virtual roadmap through the complexities of classical mythology features more than 100 full-color illustrations.