American Splendor: The Life and Times of Harvey Pekar 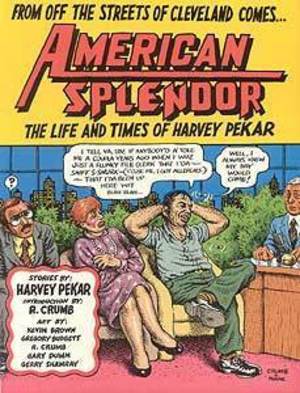 Harvey Pekar
The inspiration for the award-winning moviefrom HBO Films and Fine Line FeaturesAMERICAN SPLENDORThe Life and Times of Harvey Pekar Two classic comic anthologies in one volumeStories by Harvey PekarIntroduction by R. CrumbArt by Kevin Brown, Gregory Budgett, Sean Carroll, Sue Cavey, R. Crumb, Gary Dumm, Val Mayerik, and Gerry ShamrayThe classic collection of the comics that inspired the movie American Splendor, winner of the Grand Jury Prize at the 2003 Sundance Film FestivalAmerican Splendor is the world’s first literary comic book. Cleveland native Harvey Pekar is a true American original. A V.A. hospital file clerk and comic book writer, Harvey chronicles the ordinary and mundane in stories both funny and touching. His dead-on eye for the frustrations and minutiae of the workaday world mix in a delicate balance with his insight into personal relationships. Pekar has been compared to Dreiser, Dostoevsky, and Lenny Bruce. But he is truly more than all of them—he is himself. “Mr. Pekar has . . . proven that comics can address the ambiguities of daily living, that like the finest fiction, they can hold a mirror up to life.”—The New York Times“[Pekar] has a vision that makes daily city life—a ride on the bus, a run-in with a boss, or simply buying bread—dramatic.”—Chicago Sun-Times“Simply stated, American Splendor is the most superb literary endeavor to come off the streets of Cleveland in decades.”—The Plain Dealer (Cleveland)“Mr. Pekar lets all of life flood into his panels: the humdrum and the heroic, the gritty and the grand.”—The New York Times Book Review