Son of a Witch 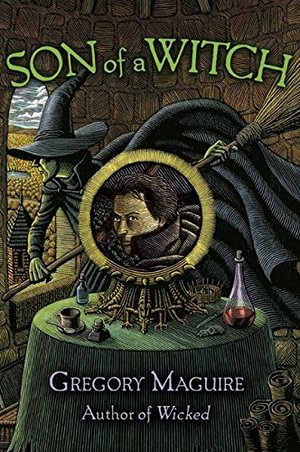 Gregory Maguire
The long-anticipated sequel to the million-copy bestselling novel Wicked Ten years after the publication of Wicked, beloved novelist Gregory Maguire returns at last to the land of Oz. There he introduces us to Liir, an adolescent boy last seen hiding in the shadows of the castle after Dorothy did in the Witch. Bruised, comatose, and left for dead in a gully, Liir is shattered in spirit as well as in form. But he is tended at the Cloister of Saint Glinda by the silent novice called Candle, who wills him back to life with her musical gifts. What dark force left Liir in this condition? Is he really Elphaba's son? He has her broom and her cape -- but what of her powers? Can he find his supposed half-sister, Nor, last seen in the forbidding prison, Southstairs? Can he fulfill the last wishes of a dying princess? In an Oz that, since the Wizard's departure, is under new and dangerous management, can Liir keep his head down long enough to grow up? For the countless fans who have been dazzled and entranced by Maguire's Oz, Son of a Witch is the rich reward they have awaited so long.

@dana22
Reviewed: 2017-08-29
Book Description The Wicked Years continue in Gregory Maguire's Son of a Witch-the heroic saga of the hapless yet determined young man who may or may not be the offspring of the fabled Wicked Witch of the West. A New York Times bestseller like its predecessor, the remarkable Wicked, Son of a Witch follows the boy Liir on his dark odyssey across an ingeniously re-imagined and nearly unrecognizable Land of Oz-a journey that will take him deep into the bowels of the <?xml:namespace prefix = st1 ns = "urn:schemas-microsoft-com:office:smarttags" />Emerald City, lately abandoned by the Wizard, and into the jaws of dragons. At once a grim fairy tale and an uplifting adventure, Son of a Witch is a true wonder.<?xml:namespace prefix = o ns = "urn:schemas-microsoft-com:office:office" /> Editorial Reviews From Publishers Weekly Starred Review. The death of Elphaba Thropp, the Wicked Witch of the West, brings about spectacular changes in this masterfully imaginative sequel to Maguire's 1995 blockbuster Wicked--most notably, the startling possibility that Elphaba had a son. Scattered among the ruins of great portions of Emerald City, many residents have been skinned and bloodied, supposedly by the barbaric Yunamatas. Travel caravan leader Oatsie Manglehand stumbles upon the body of an unknown young man, badly beaten but still alive. She presents him to the wise Superior Maunt, who recognizes the hurt boy as Liir, rumored to be the dead Witch's secreted son. A mute waif named Candle revives him with her haunting, ethereal music and hidden affections. Meanwhile, Maguire supplies alternating chapters of extensive, mesmerizing backstory of Liir's boyhood, from the witch's watery demise, to the trek to the Wizard's Castle with Dorothy and company, his search for the imprisoned princess Nor, and a long stint in the Munchkinland Army, all while donning his mother's black cape and clutching her magic broom handle. Along the way, a headspinning cast of vividly described, eccentric characters emerges, but nothing prepares Liir for Candle's shocking surprise announcement. Tucked into Maguire's enchanting fable are carefully calibrated object lessons in forgiveness, retribution, love, loss and the art of moving on despite tragic circumstances. Ten years after Wicked (which is still on Broadway), fans will once again be clicking their heels with wonderment. Copyright ® Reed Business Information, a division of Reed Elsevier Inc. All rights reserved. From School Library Journal Adult/High School-Son picks up where Maguires highly successful Wicked (HarperCollins, 1995) left off, with the death of Elphaba the Wicked Witch of the West. She left behind a daughter, Nor, and Liir, who may or may not be her son. After her death, he enters into a decade of listless soul searching. He travels for a time and then joins the military, enjoying the structure it provides his life. But eventually his rearing by the Witch as well as his possible heritage catch up to him and he finds himself in demand to start a new revolution against the tyranny of Emerald City. An odd series of disfiguring murders starts occurring all across Oz. Liir discovers that the new Emperor sits behind the machinations and uses the strange killings to spread distrust among the various races of the land. Wielding Elphabas flying broom and donning her magical cape, Liir makes some small but bold gestures that help the populace of Oz and replants the seeds of hope that Elphaba spread a generation before. Son is a tighter work than Wicked, making deft use of flashbacks and varying viewpoints to create a quicker pace. And Liirs quest-both to find himself and to save the people of Oz-is easier to believe than the motivations that drove the bitter yet heroic Elphaba. A well-written, well-crafted fantasy that can stand on its own.-Matthew L. Moffett, Northern Virginia Community College, Annandale Copyright ® Reed Business Information, a division of Reed Elsevier Inc. All rights reserved.
Item Posts
@worldsapart911y 5mo
completed ... on 2019-02-01
© 2020 libib.com / All rights reserved