Feast for Crows: A Song of Ice and Fire: Book Four, A 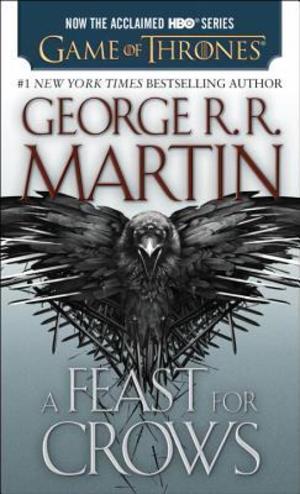 George R.R. Martin
After centuries of bitter strife, the seven powers dividing the land have beaten one another into an uneasy truce. Few legitimate claims to the Iron Throne still exist, and the war that has turned the world into little more than a wasteland has finally burned itself out. Or so it appears. For it’s not long before the survivors, outlaws, renegades, and carrion eaters of the Seven Kingdoms gather. Now, as the human crows assemble over a banquet of ashes, daring new plots and dangerous new alliances are formed, while surprising faces—some familiar, others only just appearing—emerge from an ominous twilight of past struggles and chaos to take up the challenges of the terrible times ahead. Nobles and commoners, soldiers and sorcerers, assassins and sages, are coming together to stake their fortunes . . . and their lives. For at a feast for crows, many are the guests—but only a few are the survivors.   Praise for George R. R. Martin and A Feast for Crows   “The American Tolkien . . . Of those who work in the grand epic-fantasy tradition, [George R. R. Martin] is by far the best.”—Time   “Long live George Martin . . . a literary dervish, enthralled by complicated characters and vivid language, and bursting with the wild vision of the very best tale tellers.”—The New York Times   “A fantasy series for hip, smart people, even those who don’t read fantasy.”—Chicago Tribune

I must admit that right after reading A Storm of Swords I was excited to read A Feast of Crows, but like the first book of the series A Game of Thrones I had a hard time reading this book. I'm not sure why it was, but the story just didn't interest me as much as it had done in the previous books. It is an exceptional book, and I enjoyed the story, but it didn't keep my attention as the last two had done and because of that I am giving it 3.5 out of 5 stars. I will say though the second time I read the book I enjoyed it more but I write my reviews on my first impression.