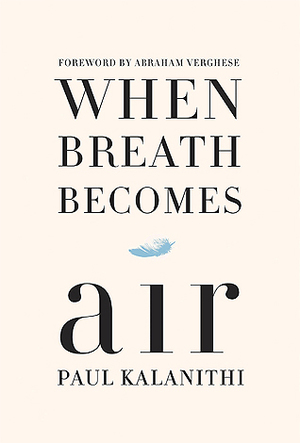 Paul Kalanithi
For readers of Atul Gawande, Andrew Solomon, and Anne Lamott, a profoundly moving, exquisitely observed memoir by a young neurosurgeon faced with a terminal cancer diagnosis who attempts to answer the question What makes a life worth living?At the age of thirty-six, on the verge of completing a decade’s worth of training as a neurosurgeon, Paul Kalanithi was diagnosed with stage IV lung cancer. One day he was a doctor treating the dying, and the next he was a patient struggling to live. And just like that, the future he and his wife had imagined evaporated. When Breath Becomes Air chronicles Kalanithi’s transformation from a naïve medical student “possessed,” as he wrote, “by the question of what, given that all organisms die, makes a virtuous and meaningful life” into a neurosurgeon at Stanford working in the brain, the most critical place for human identity, and finally into a patient and new father confronting his own mortality. What makes life worth living in the face of death? What do you do when the future, no longer a ladder toward your goals in life, flattens out into a perpetual present? What does it mean to have a child, to nurture a new life as another fades away? These are some of the questions Kalanithi wrestles with in this profoundly moving, exquisitely observed memoir. Paul Kalanithi died in March 2015, while working on this book, yet his words live on as a guide and a gift to us all. “I began to realize that coming face to face with my own mortality, in a sense, had changed nothing and everything,” he wrote. “Seven words from Samuel Beckett began to repeat in my head: ‘I can’t go on. I’ll go on.’” When Breath Becomes Air is an unforgettable, life-affirming reflection on the challenge of facing death and on the relationship between doctor and patient, from a brilliant writer who became both.Advance praise for When Breath Becomes Air“[When Breath Becomes Air] split my head open with its beauty.”—Cheryl Strayed“Rattling, heartbreaking, and ultimately beautiful, the too-young Dr. Kalanithi’s memoir is proof that the dying are the ones who have the most to teach us about life.”—Atul Gawande“Those of us who never met Paul Kalanithi will both mourn his death and benefit from his life. This is one of a handful of books I consider to be a universal donor—I would recommend it to anyone, everyone.”—Ann Patchett“Inspiring . . . This deeply moving memoir reveals how much can be achieved through service and gratitude when a life is courageously and resiliently lived.”—Publishers Weekly “Writing isn’t brain surgery, but it’s rare when someone adept at the latter is also so accomplished at the former.”—Kirkus Reviews (starred review) “This eloquent, heartfelt meditation on the choices that make live worth living, even as death looms, will prompt readers to contemplate their own values and mortality.”—Booklist “Every doctor should read this book—written by a member of our own tribe, it helps us understand and overcome the barriers we all erect between ourselves and our patients as soon as we are out of medical school.”—Henry Marsh, author of Do No Harm: Stories of Life, Death, and Brain Surgery“A tremendous book, crackling with life, animated by wonder and by the question of how we should live. Paul Kalanithi lived and died in the pursuit of excellence, and by this testimonial, he achieved it.”—Gavin Francis, author of Adventures in Human Being

I read this book twice. One on paperback & then second round I listened to the audiobook. I went through the review in here when I finished reading it for the first time, & I was confused with the mixed review that people gave. Which is why I decided to read (listen) to it again, to get a better understanding & see if my feelings changed after that.

I like this book. I really do. It was a beautifully written memoir of a young, brilliant neurosurgeon who was diagnosed with stage IV lung cancer.

To keep things simple, what I don’t like about this book:

-flow of reading (for me) was not smooth as some words were beyond my comprehension (excessive use of thesaurus maybe??) (i thought my english was bad but I did stumbled upon reviews that some readers complaint about this too). I prefer the epilogue written by Paul’s wife, Lucy. It felt more natural & easy flow.

-I need more of it. I can feel like there’s more that Paul wanted to share. It is so sad & heart breaking to think that he did not get the chance to share it with us.

What I love about this book:

-he recalling his experiences as a doctor (neurosurgeon). It was so eloquently written, I felt like I’m watching a medical drama in my head.

-that he did not dwell on self pity & being melodramatic. It was straightforward how he felt, his journey toward acceptance & embracing his death. One we could definitely learn from him.

This book is not a life changing book for me. But it did teach me (made me come to realisation), that death is coming to us all. We have to accept that with open heart & stop resisting it.

We do not stop living until the day we die. And in the face of death, despite all of the uncertainties, you could still continue living by focusing on what mattered to you and create a beautiful and meaningful life for you & those who you are leaving behind by knowing your value & what makes you, YOU.

RIP Paul. You’re taken from us too young too soon, what happened to you was such a tragedy, but your life is definitely not. Thanks for writing such a beautiful memoir for us all to reflect & learn upon.