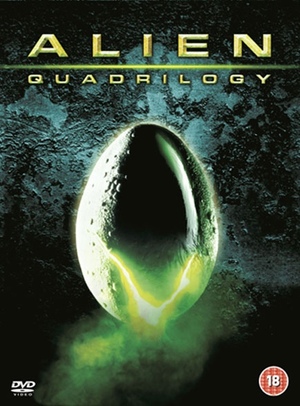 Ridley Scott, James Cameron, Jean-Pierre Jeunet, David Fincher
The Alien Quadrilogy is a nine-disc box set devoted to the four Alien films. Although previously available on DVD as the Alien Legacy, here the films have been repackaged with vastly more extras and with upgraded sound and vision. For anyone who hasn't been in hypersleep for the last 25 years this series needs no introduction, though for the first time each film now comes in both original and "Special Edition" form. Alien (1979) was so perfect it didn't need fixing, and Ridley Scott's 2003 Director's Cut is fiddling for the sake of it. Watch once then return to the majestic, perfectly paced original. Conversely the Special Edition of James Cameron's Aliens (1986) is the definitive version, though it's nice finally to have the theatrical cut on DVD for comparison. Most interesting is the alternative Alien3 (1992). This isn't a "director's cut"--David Fincher refused to have any involvement with this release--but a 1991 work-print that runs 29 minutes longer than the theatrical version, and has now been restored, remastered and finished-off with (unfortunately) cheap new CGI. Still, it's truly fascinating, offering a different insight into a flawed masterpiece. The expanded opening is visually breathtaking, the central firestorm is much longer, and a subplot involving Paul McGann's character adds considerable depth to the story. The ending is also subtly but significantly different. Alien Resurrection (1997) was always a mess with a handful of brilliant scenes, and the Special Edition just makes it eight minutes longer. On the DVD: Alien Quadrilogy offers all films except Alien3 with DTS soundtracks, the latter having still fine Dolby Digital 5.1 presentation. All four films sound fantastic, with much low-level detail revealed for the first time. Each is anamorphically enhanced at the correct original aspect ratio, and the prints and transfers are superlative. Every film offers a commentary that lends insight into the creative process--though the Scott-only commentary and isolated music score from the first Alien DVD release are missing here--and there are subtitles for hard of hearing both for the films and the commentaries. Each movie is complemented by a separate disc packed with hours of seriously detailed documentaries (all presented at 4:3 with clips letterboxed), thousands of photos, production stills and storyboards, giving a level of inside information for the dedicated buff only surpassed by the Lord of the Rings extended DVD sets. A ninth DVD compiles miscellaneous material, including a Channel 4 hour-long documentary and even all the extras from the old Alien laserdisc. Exhaustive hardly begins to describe the Alien Quadrilogy, a set which establishes the new DVD benchmark for retrospective releases and which looks unlikely to be surpassed for some time. --Gary S Dalkin