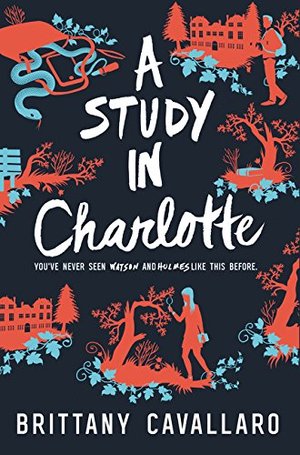 Brittany Cavallaro
The first book in a witty, suspenseful new trilogy about a brilliant new crime-solving duo: the teen descendants of Sherlock Holmes and John Watson. This clever page-turner will appeal to fans of Maureen Johnson and Ally Carter.Jamie Watson has always been intrigued by Charlotte Holmes; after all, their great-great-great-grandfathers are one of the most infamous pairs in history. But the Holmes family has always been odd, and Charlotte is no exception. She’s inherited Sherlock’s volatility and some of his vices—and when Jamie and Charlotte end up at the same Connecticut boarding school, Charlotte makes it clear she’s not looking for friends.But when a student they both have a history with dies under suspicious circumstances, ripped straight from the most terrifying of the Sherlock Holmes stories, Jamie can no longer afford to keep his distance. Danger is mounting and nowhere is safe—and the only people they can trust are each other.

@ruthsic
Reviewed: 2018-01-25
A Sherlock Holmes redux in which the master detective’s great-great-granddaughter, Charlotte, and John Watson’s great-great-grandson, Jamie, must unravel the mystery of why they’re being framed for a murder at their American boarding school—while Jamie fights to understand the brilliant and damaged girl beneath her barbed-wire facade.

Sherlock Holmes has been a legend in the mystery genre, and a retelling in modern times, is well, not really uncommon at the moment, with BBC's Sherlock and CBS's Elementary (which I really prefer over every other adaptation). But a female Sherlock (well, his descendant actually) had me intrigued; a boarding school setting just was the cherry on top of the cake. The story starts with these two descendants, Charlotte Holmes and James Watson, meeting each other - they were aware of the other's existence, and this wasn't the first time a Watson and a Holmes were friends. But when a common enemy to them gets killed, they immediately become prime suspects. Naturally, she wants to solve the case, and he, intrigued with the mystery of her since his childhood, wants to help.

What I liked foremost in this book was that, despite being a mystery, it gave equal attention to characterization. James is a bit obsessed with being the Watson to her Holmes, sure, but he is also drawn to her romantically. Their partnership is a slow burn, and Charlotte is kind of an aloof genius, much like her famous ancestor. She has her vices and her baggage, and he wants to protect her from them. He wants to be her friend and her partner, and she respects him enough to consider him more than a sidekick. What was even more hilarious was him wondering if there was a guide book for Watsons to take care of their Holmeses, and his father actually writing him one. They are thick as thieves, but also have friendships and relationships besides the one they share. The book shows her brilliance, his loyalty and their undeniable chemistry, as friends and as sleuthing partners. The nods to the various Sherlock Holmes books, and inclusion of the Moriartys was a nice bonus in this thoroughly enjoyable tale.