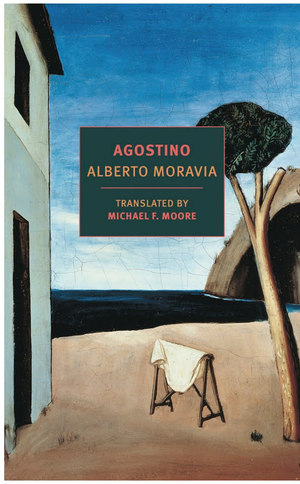 Moravia, Alberto
Thirteen-year-old Agostino is spending the summer at a Tuscan seaside resort with his beautiful widowed mother. When she takes up with a cocksure new companion, Agostino, feeling ignored and unloved, begins hanging around with a group of local young toughs. Though repelled by their squalor and brutality, and repeatedly humiliated for his weakness and ignorance when it comes to women and sex, the boy is increasingly, masochistically drawn to the gang and its rough games. He finds himself unable to make sense of his troubled feelings. Hoping to be full of manly calm, he is instead beset by guilty curiosity and an urgent desire to sever, at any cost, the thread of troubled sensuality that binds him to his mother. Alberto Moravia’s classic, startling portrait of innocence lost was written in 1942 but rejected by Fascist censors and not published until 1944, when it became a best seller and secured the author the first literary prize of his career. Revived here in a new translation by Michael F. Moore, Agostino is poised to captivate a twenty-first-century audience.