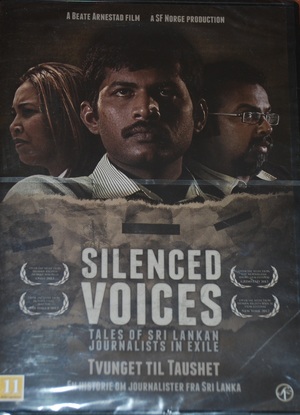 Beate Arnestad
This is a film about freedom of speech and the messengers of truth to portray how much individuals are willing to offer to bring information to light. The film is told as a personal encounter with exiled journalists who have been "silenced" and almost killed in their home country because they exposed war crimes, corruption and massacres of civilians. They claim these crimes have been committed by the state. Miraculously, they have managed to escape their home country and are now in "safe" countries in the west. Following extensive research, collaboration was established with the two known Sri Lankan journalists, Sonali and Bashana. Both are continuing their work from secret hiding. They know they are fighting a lonely and dangerous battle against the enormous amount of propaganda spread by government officials to ensure the world will never know what really went on. They are putting their own lives at risk to be messengers of the crimes that they are convinced their government has implicated itself in. (Sri Lanka is ranking one of the worst countries in Asia with respect to freedom of expression. In the past few years, several have been murdered or just disappeared. Close to 50 media workers have recently fled the country.)