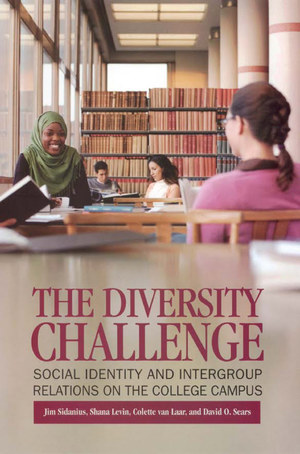 James Sidanius, Shana Levin, Colette Van Laar, David O. Sears
College campuses provide ideal natural settings for studying diversity: they allow us to see what happens when students of all different backgrounds sit side by side in classrooms, live together in residence halls, and interact in one social space. By opening a window onto the experiences and evolving identities of individuals in these exceptionally diverse environments, we can gain a better understanding of the possibilities and challenges we face as a multicultural nation. The Diversity Challenge—the largest and most comprehensive study to date on college campus diversity—synthesizes over five years’ worth of research by an interdisciplinary team of experts to explore how a highly diverse environment and policies that promote cultural diversity affect social relations, identity formation, and a variety of racial and political attitudes. The result is a fascinating case study of the ways in which individuals grow and groups interact in a world where ethnic and racial difference is the norm. The authors of The Diversity Challenge followed 2,000 UCLA students for five years in order to see how diversity affects identities, attitudes, and group conflicts over time. They found that racial prejudice generally decreased with exposure to the ethnically diverse college environment. Students who were randomly assigned to roommates of a different ethnicity developed more favorable attitudes toward students of different backgrounds, and the same associations held for friendship and dating patterns. By contrast, students who interacted mainly with others of similar backgrounds were more likely to exhibit bias toward others and perceive discrimination against their group. Likewise, the authors found that involvement in ethnically segregated student organizations sharpened perceptions of discrimination and aggravated conflict between groups. The Diversity Challenge also reports compelling new evidence that a strong ethnic identity can coexist with a larger community identity: students from all ethnic groups were equally likely to identify themselves as a part of the broader UCLA community. Overall, the authors note that on many measures, the racial and political attitudes of the students were remarkably consistent throughout the five year study. But the transformations that did take place provide us with a wealth of information on how diversity affects individuals, groups, and the cohesion of a community. Theoretically informed and empirically grounded, The Diversity Challenge is an illuminating and provocative portrait of one of the most diverse college campuses in the nation. The story of multicultural UCLA has significant and far-reaching implications for our nation, as we face similar challenges—and opportunities—on a much larger scale.