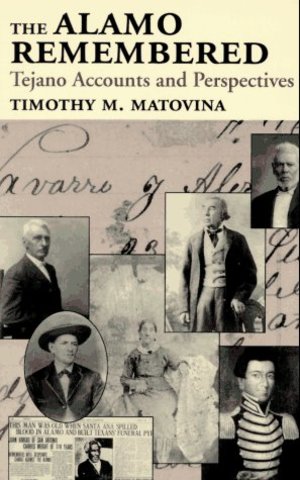 Timothy M. Matovina
As Mexican soldiers fought the mostly Anglo-American colonists and volunteers at the Alamo in 1836, San Antonio's Tejano population was caught in the crossfire, both literally and symbolically. Though their origins were in Mexico, the Tejanos had put down lasting roots in Texas and did not automatically identify with the Mexican cause. Indeed, as the accounts in this new collection demonstrate, their strongest allegiance was to their fellow San Antonians, with whom they shared a common history and a common plight as war raged in their hometown.Timothy M. Matovina here gathers all known Tejano accounts of the Battle of the Alamo. These accounts consist of first reports of the battle, including Juan N. Seguín's funeral oration at the interment ceremony of the Alamo defenders, conversations with local Tejanos, unpublished petitions and depositions, and published accounts from newspapers and other sources. This communal response to the legendary battle deepens our understanding of the formation of Mexican American consciousness and identity.