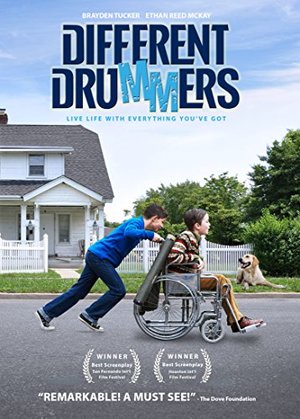 Lyle Hatcher, Don Caron
David is growing weaker with muscular dystrophy and is confined to a wheelchair when he befriends Lyle, who's increasingly hyperactive. They both become convinced that with faith and willpower, Lyle can teach David to run! As one tries to give the other his extra energy, they learn life's transcendent, painful lessons. Based on a true story. A pact is made, and Lyle soon begins to twist the rules in a desperate attempt to give his friend some of his own excess energy. Along the way, the two boys come face to face with life's most painful truths, and Lyle's question is ultimately answered in a way he never could have imagined. Limited Theatrical Release - Different Drummers is a deeply inspirational and transcendent family film - based on a true story - about the unusual spiritual journey and unlikely friendship of two boys growing up in Spokane, Washington in the mid 1960s. Eleven-year-old DAVID, wheelchair-bound by muscular dystrophy, is growing progressively weaker, while his friend, LYLE (10), has a problem with an increasingly high energy level. David informs Lyle that their teacher is about to die and states that the source of this sad revelation is none other than God. When their teacher does die, a doubtful and confused Lyle feels he must find out for certain if God exists. Inspired by his TV idol, JACK LALANNE, and LaLanne's message of "working a miracle through intestinal fortitude and willpower," Closed Captioning 107 Min. - Four Doves - Dove "Faith-Friendly" For Ages All Ages