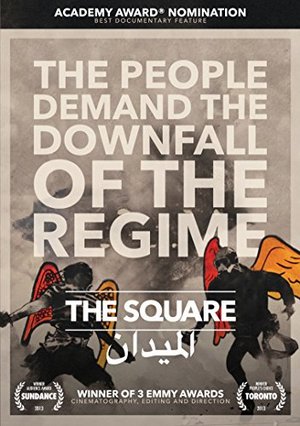 The Square is a 2013 Egyptian-American documentary film by Jehane Noujaim, which depicts the ongoing Egyptian Revolution of 2011 from its roots in Tahrir Square. The film was nominated for the Academy Award for Best Documentary Feature at the 86th Academy Awards. It also won three Emmy Awards at the 66th Primetime Creative Arts Emmy Awards, out of four for which it was nominated. The Square premiered on January 17, 2013 at the 2013 Sundance Film Festival, where it won the Audience Award for World Cinema in the documentary category. Due to the ongoing nature of the Egyptian Revolution, Noujaim updated the ending of the film over the summer of 2013. The film was subsequently also named winner of the People's Choice Award in the documentary category at the 2013 Toronto International Film Festival. The production is done in the native languages of its cast, and is presented with English subtitles. The Square received universal acclaim, currently holding a 100% fresh rating on review aggregator website Rotten Tomatoes.[8] On Metacritic, the film has an 83/100 rating, indicating universal acclaim.[9] The Chicago Tribune described it as A compelling inside look at the cascading series of revolutions and counterrevolutions that have shaken Egypt since the beginning of 2011.The Washington Post described it as elegantly shot and structured, but infused with rough, spontaneous energy; global in its consciousness but intimate in its approach; carefully pitched but emotionally wrenching; deeply troubling but ultimately exhilarating. Writing for Bright Lights Film Journal, Gregory Stephens suggests the film soberly confirms that only rarely do revolutions 'jump their tracks' so that a new script can be written. ... This disaffection, both spontaneous and stylized, makes good copy, and good theatre. On whether or not it can lead to a new script of how government 'of the people' serves the often conflicting interests of its citizens, the jury is still out. Bonus features include: Over 90 minutes of deleted scenes and exclusive content