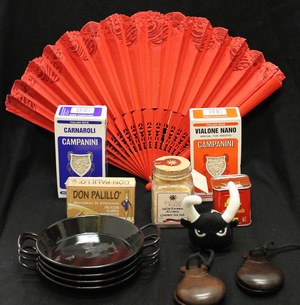 Cornell University
Items from Spain include a Spanish flag, a fan, two castanets, soap, toothpicks, an empty rice sack, four paella pans, salt, smoked paprika, pottery, two matador posters, fake euros, two peineta hair pieces, a hat, a book on making churros with a churro maker, and an assortment of books and activities. Items from Central Europe include a german flag, a map of Europe, postcards of major cities, timeline poster about the EU, a poster of EU money, two boxes of Italian rice, a pen from Berlin, an assortment of postcards from Germany, Euros, a piece of the Berlin wall, an assortment of children's books in German, and assortment of books on the EU, a book of Irish legends, and a CD on the EU. The items from Scandinavia include a Finnish and Norwegian flag.