Crossing the Barriers: The Autobiography of Allan H. Spear 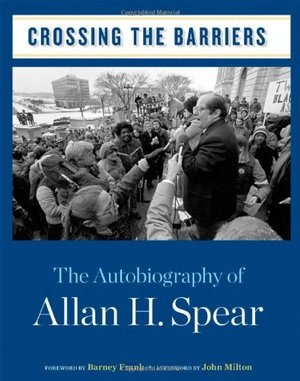 Allan H. Spear
Allan Spear had a long and distinguished career as a historian and as a Minnesota state senator. Perhaps best known for coming out as openly gay during his first term in the Minnesota Senate-becoming one of the first elected officials in the nation to do so-Spear was also a leader of Eugene McCarthy's run for the presidency, an organizer against the war in Vietnam, and a key proponent for the establishment of the African-American studies department at the University of Minnesota. Spear's memoirs are fascinating and moving: in early chapters on his childhood and college years, he writes with great introspection about his growing self-awareness of being gay. Later he writes about his development as an intellectual, particularly as a white man fighting to win legitimacy for the study of African-American history and culture. During his time at the University of Minnesota, Spear became deeply involved with the Minnesota Democratic-Farmer-Labor Party (DFL) and the antiwar movement. At the same time, Spear became increasingly active in the emerging gay rights movement and began the process of coming out to his friends and colleagues. After a failed run for the Minnesota House in 1968, Spear was elected to the Minnesota Senate in 1972 and served as Senate president from 1993-2000. In 1993, he was instrumental in the passage of the Minnesota Human Rights Act, which protected LGBT people from discrimination in housing, education, and employment-an achievement he considered one of the finest of his career. A skilled parliamentarian, he remained a progressive leader in the legislature until his retirement in 2000. Spear passed away on October 11, 2008, leaving his memoir slightly incomplete. A stirring afterword by John Milton completes the story of Spear's life, chronicling the recognition of his accomplishments as a politician and activist during his final years.