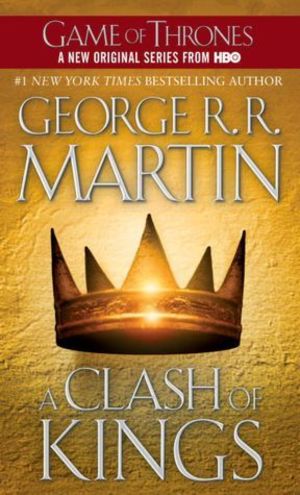 George R.R. Martin
THE BOOK BEHIND THE SECOND SEASON OF GAME OF THRONES, AN ORIGINAL SERIES NOW ON HBO.In this eagerly awaited sequel to A Game of Thrones, George R. R. Martin has created a work of unsurpassed vision, power, and imagination. A Clash of Kings transports us to a world of revelry and revenge, wizardry and warfare unlike any you have ever experienced.A CLASH OF KINGSA comet the color of blood and flame cuts across the sky. And from the ancient citadel of Dragonstone to the forbidding shores of Winterfell, chaos reigns. Six factions struggle for control of a divided land and the Iron Throne of the Seven Kingdoms, preparing to stake their claims through tempest, turmoil, and war. It is a tale in which brother plots against brother and the dead rise to walk in the night. Here a princess masquerades as an orphan boy; a knight of the mind prepares a poison for a treacherous sorceress; and wild men descend from the Mountains of the Moon to ravage the countryside. Against a backdrop of incest and fratricide, alchemy and murder, victory may go to the men and women possessed of the coldest steel...and the coldest hearts. For when kings clash, the whole land trembles.

Took me a while to plow through, and the second half moved much quicker. Adding more characters' views made reading a but daunting at times-- just when I was getting into one person, it changed views again, and while I understand why we needed a voice in each the kings' camp, was a lot to keep track of, and I caught myself skimming some chapters. And poor Daenrys, who I loved in the first book, was dreadfully boring and inconsequential in this one.

Really good sequel to the first book, the ending was really good. Good character development and gets more exciting as it goes on.