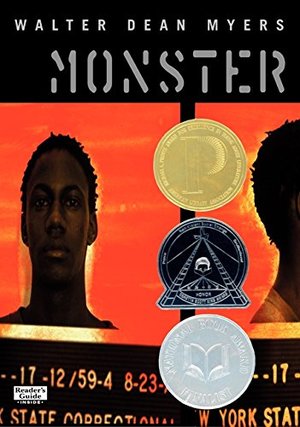 Walter Dean Myers
FADE IN: INTERIOR: Early morning in CELL BLOCK D, MANHATTAN DETENTION CENTER.Steve (Voice-Over)Sometimes I feel like I have walked into the middle of a movie. Maybe I can make my own movie. The film will be the story of my life. No, not my life, but of this experience. I'll call it what the lady prosecutor called me ... Monster.

@fourfreedoms
Reviewed: 2019-05-17
This is a very important work, but far too 'gritty' and close to home in terms of dealing with bullying and how the protagonist had to become hardened and emotionally deadened in order to survive. This book needs to be read by those who have not experienced such things, not for them to hurt as we have been hurt, but for all to understand so that we can create a world where such things no longer happen.
@etm
Reviewed: 2016-08-16

Monster is written in a unique perspective, where half of the book is from the perspective of Steve’s diary and the other portions are in the form of a screenplay. I found it a fun and entertaining way to read about the story of Steve’s trial. It’s a great way for students to learn about the legal system and how the proceeding go. There’s a great cast of characters too that really convey emotion. Myers does a fantastic job of making people come to life, like the witty prosecution lawyer Petrocelli, the unphased and unsympathetic “Bobo” Evans, and Steve’s emotionally torn parents.

The best thing this novel does is convey the self-reflection and struggle that Steve is forced to go through. After he’s called a “monster” by the prosecution, he has an awakening where he’s constantly trying to figure out who he is as a person. He’s always trying to convince himself that he’s a good man and he just wants everyone to know this about him. As a reader, you feel bad for Steve because he’s so young and didn’t really know what or who he was getting involved with. It’s a great reminder for the reader to be cognisant of their actions. At the end of the book, even months after he’s ruled not guilty, he still struggles with his image. His lawyer didn’t embrace his thankful hug after the trial. His father seems to distance himself from him. The tag of being a monster still haunts him and he’s not sure if it will ever go away in the mind of his family and friends.

One thing that stood out for me was the vicious depiction of prison. It might be too much for some young readers. There’s the mention of sex amongst male inmates a few times (and how it scares the main character) and a lot of violence in the form of beatings and assault. One inmate gets his eye punctured with a weapon and there’s the description of blood going everywhere while he screams in pain. While it doesn’t bother me, it might not sit well with some parents.