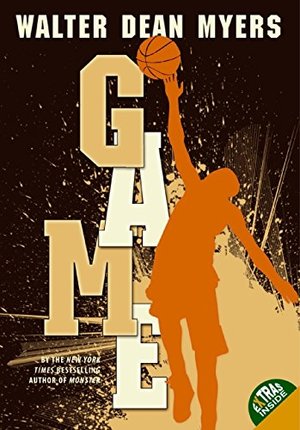 Walter Dean Myers
Drew Lawson knows basketball is taking him places. It has to, because his grades certainly aren't. But lately his plan has run squarely into a pick. Coach's new offense has made another player a star, and Drew won't let anyone disrespect his game. Just as his team makes the playoffs, Drew must come up with something big to save his fading college prospects. It's all up to Drew to find out just how deep his game really is.

I have read some of Walter Dean Myers' other books such as Scorpion and to be honest, I enjoyed Scorpion better than Game. Although I think that Game was well written and carries many important themes for middle school readers, it was a bit hard to get into. I felt that the beginning of the book dragged a little bit and does not really hook the reader in. However, students may really enjoy this book if they play basketball and know many of the basketball terms. I felt that the author went a little too far with descriptions of basketball drills, plays and sequences and may be hard for a student to really understand and follow if they don't know the game well. I felt that this particular part of the text was a bit boring, but I did start to enjoy the book more with the introduction of the character, Tomas, and the apparent riff that started to occur between Tomas and Drew over race. I feel that this book has an important message about cultural diversity, accepting one another based on race, and also discusses how to face enviornmental challenges. Throughout the text, Drew has to face many obstacles growing up with some crime and violence in Harlem, New York and knowing many people from school who have gotten in trouble with the law. Overall, it was a fair read, but I enjoyed his Scorpion book better, which involved a student named Jamal who was having a difficult home life and had to deal with the pressure to join gangs.