Rose and the Dagger, The 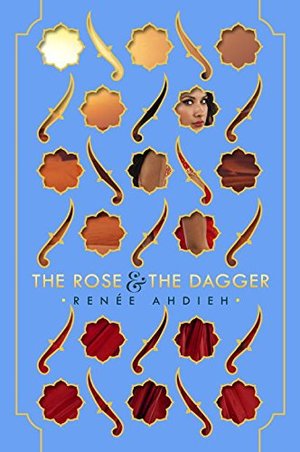 Renée Ahdieh
The much anticipated sequel to the breathtaking The Wrath and the Dawn, lauded by Publishers Weekly as "a potent page-turner of intrigue and romance."I am surrounded on all sides by a desert. A guest, in a prison of sand and sun. My family is here. And I do not know whom I can trust.In a land on the brink of war, Shahrzad has been torn from the love of her husband Khalid, the Caliph of Khorasan. She once believed him a monster, but his secrets revealed a man tormented by guilt and a powerful curse—one that might keep them apart forever. Reunited with her family, who have taken refuge with enemies of Khalid, and Tariq, her childhood sweetheart, she should be happy. But Tariq now commands forces set on destroying Khalid's empire. Shahrzad is almost a prisoner caught between loyalties to people she loves. But she refuses to be a pawn and devises a plan.While her father, Jahandar, continues to play with magical forces he doesn't yet understand, Shahrzad tries to uncover powers that may lie dormant within her. With the help of a tattered old carpet and a tempestuous but sage young man, Shahrzad will attempt to break the curse and reunite with her one true love.

@novastarscream
Reviewed: 2022-01-15
Good sequel, it built well on the characterization that Khalid isn’t a bad person just traumatized and hardened by his life. I do dislike that (spoilers) Shazi’s father turned hateful because of the book and then suddenly turned good again. I think that could of been explored further.
@torykohrin
Reviewed: 2021-05-22
It s funny that sometimes, it s like I almost forgot you can actually use all those five stars! But finally, this one got me and after all this time I felt I really can rate a book with 5 stars.
@mindthewolves
Reviewed: 2020-09-12
The lyrical writing of the first book (or my memory of it) is curiously absent in the second; in The Rose and the Dagger, the dominant rhythm of the paragraphs is as follows:

Used sparingly, maybe the sentence fragments would have more impact (I assume that’s the intended effect). The actual result is clunky, overdramatic prose that again tells more than shows. And joining the insta-love ranks, we have a 14-year-old this time. Does it need to be said that not every YA character has to fall in eternal and undying love by the age of 18? I guess it does. Please develop your characters as individuals, rather than pairing them up as an excuse for a character arc. Your characters are not rescue dogs in need of a forever home.

Although the characterization tends to be superficial, the women in the story have a ton of agency and use it, unapologetically. Their actions more or less drive the plot, whereas a lot of the male characters have much more passive/reactive roles. Sadly (see above paragraph), all the characters are still very much defined by their love interests. Rational thought is apparently impossible within fifty feet of one’s love interest.

Moving onto the question of world, all the magic has crawled out of the woodwork in this one. It’s strange, because magic is hardly addressed in the first book; Shahrzad’s father makes a rose bloom for her when he says goodbye, and a curse is introduced, but the rest of the book deals in mundane problems with mundane solutions. Yet in the sequel, magic abounds. However, it is 1) completely arbitrary and 2) only seems to exist in the people around Shahrzad. If magic is rare, why is she a giant magnet for it? If magic is common, why hasn’t it pervaded into everyday life – why aren’t peddlers selling magic wares, even if nothing more than a cantrip; why didn’t any of the previous seventy-one wives beg/borrow/steal magic to try and stay alive; why isn’t it being used to help rebuild the city?

Wow, what a ride. Full of twists and turns and ups and downs.. oh, so many down.

This was a slow book for me, the longest it has ever taken me to finish a book to date, almost 3 months. Though, at first I took that as a negative now I see how wrong I am.

Being that it too me so long to finish this book, I feel like I spent a lot of time with each character and at the end it tore at my heartstrings that much more. There was so much bloodshed towards the last few pages, so many lies and senseless deaths. I weeped with them, I laughed with them and truthfully, I enjoyed the ride. As slow as it might've been.

This series truly is so much more than I could ever put into words.

Just read the darn book, I promise you won't regret it.

@ginadavidson
Reviewed: 2018-07-18
Not nearly as good as the first; the whole breaking of the curse thing was anticlimactic as fuck and Irsa was so annoying and her POV was so unnecessary. Wish there had been more Shazi but I liked the continuation of themes and symbols from the first book.
@bookworm0719
Reviewed: 2018-05-07
The darker the sky, the brighter the stars. In a land on the brink of war, Shahrzad is forced from the arms of her beloved husband, the Caliph of Khorasan. She once thought Khalid a monster-a merciless killer of wives, responsible for immeasurable heartache and pain-but as she unraveled his secrets, she found instead an extraordinary man and a love she could not deny. Still, a curse threatens to keep Shazi and Khalid apart forever. Now she’s reunited with her family, who have found refuge in the desert, where a deadly force is gathering against Khalid-a force set on destroying his empire and commanded by Shazi’s spurned childhood sweetheart. Trapped between loyalties to those she loves, the only thing Shazi can do is act. Using the burgeoning magic within her as a guide, she strikes out on her own to end both this terrible curse and the brewing war once and for all. But to do it, she must evade enemies of her own to stay alive. This book definitely kept me on my toes. It was so much better than I was anticipating and I am so happy for that. The Rose & the Dagger starts where The Wrath & the Dawn left off. Shazi and Khalid are split up and Shazi is back with her family in the desert. We get to see a lot more of Shazi’s sister, Irsa, who I absolutely loved. Her character growth was so great. She went from being this small, shy girl to a girl with a voice and so much more strength. We are also introduced to a new character, Artan, who is so funny and just as smart-mouthed as Shahrzad. So of course the two butt heads at first because of their stubbornness but quickly become friends. We also got to see a lot more of Tariq and Rahim. Rahim quickly became a favorite character for me. This one had a lot more action, in my opinion, than The Wrath & the Dawn but less romance. A big part of that probably being because Khalid and Shazi were split up. But I think that it worked great for the book. Their relationship was so well built in the first book that you didn’t second guess their feelings for each other. Ultimately, I was very satisfied with the ending of this book and I recommend picking it up if you enjoyed The Wrath & the Dawn. I’m sure you will love this one just as much! 5/5 stars for sure!
Item Posts
@tween2teenbooks10mo 27d
completed ... on 2016-02-29
@bjezerey1y 3mo
completed ... on 2016-05-30
@bjezerey1y 3mo
began ... on 2016-05-29
@rebecafedrick1y 8mo
completed ... on 2020-05-10
@rebecafedrick1y 9mo
began ... on 2020-02-15
@rmsantiago2y 6mo
completed ... on 2017-06-14
@rmsantiago2y 6mo
began ... on 2017-05-11
@edgeyguy2y 10mo
completed ... on 2019-03-15
@edgeyguy2y 10mo
began ... on 2019-03-13
@jennyio3y 0mo
completed ... on 2018-12-31
@jennyio3y 0mo
began ... on 2018-12-30
@ginadavidson3y 6mo
completed ... on 2016-06-30
@makaylamw3y 6mo
completed ... on 2018-07-20
@makaylamw3y 6mo
began ... on 2018-07-11
@olidolli4y 9mo
began ... on 2017-04-16
© 2022 libib.com / All rights reserved