Crown (The Selection), The 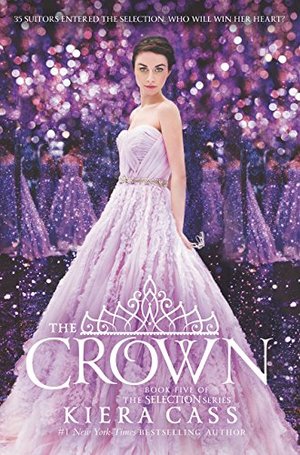 Kiera Cass
Kiera Cass’s #1 New York Times bestselling Selection series has captured the hearts of readers from its very first page. Now the end of the journey is here. Prepare to be swept off your feet by The Crown—the eagerly awaited, wonderfully romantic fifth and final book in the Selection series.In The Heir, a new era dawned in the world of The Selection. Twenty years have passed since America Singer and Prince Maxon fell in love, and their daughter is the first princess to hold a Selection of her own.Eadlyn didn’t think she would find a real partner among the Selection’s thirty-five suitors, let alone true love. But sometimes the heart has a way of surprising you…and now Eadlyn must make a choice that feels more difficult—and more important—than she ever expected.

***DO NOT READ if you have not read The Selection, then The Elite, and then The One. You will either be lost to referenced events or character development. You must also finish The Heir, which is the first book to this duology.***

The best description for this book/series in 10 words or less:
"The Bachelorette meets royalty in the post-apocalyptic United States."

The cliffhanger of The Heir made the year wait for this book excruciating, but well worth it. You can really see Eadlyn's growth as she goes from a spoiled princess with a "woe is me" attitude to a responsible royal who finds empathy and sympathy for her people through her mother's health scare. She quickly realizes it's time to put up the tiara and start wearing the crown like a true royal. Eadlyn learns what it takes to be a true royal while also staying true to herself and not giving into temptation. I feel like the story had some unexpected twists and turns that really elevated the storyline.

Her epiphany of what true love looks like was inspiring as she watched her parents together as she truly sees her parents' love and realizes that their love is selfless. She sacrificially takes her father's role leading the country as regent just so her mother can heal and her father can sleep.

The suitors all develop nicely and so does their relationships with Eadlyn.

I personally like Kile. He's the childhood friend that had a falling out but became Eadlyn's best friend. I was rooting for him. Hale is sweet but I always felt off with his character. My suspicions about him are almost spot on. Henri is also very sweet but I have a hard time seeing him with Eadlyn. Then there's Erik who is Henri's translator and not a suitor. His character development is seen more as he helps Henri, and we learn that he comes from humble beginnings.

The only gripe I had with Eadlyn was she made me love one character and then changes her mind.

I was never really a fan of Marid in The Heir, and my suspicions of him were right in The Crown. Even though he seemed to be a reliable character at the beginning of the novel, I couldn't stand him in this installment

The issue with Ahren bothered me. It's a cruel thing to up and leaves your family home without a single word, which causes his mother to have a heart attack. This forces Eadlyn to take control and lead her country early, but I feel this was also very necessary to happen. It also seemed somewhat out of character.

The twists in the book were absolutely unexpected but perfect. It kept me reading as the novel continued. It made me love all the characters and fear the same uncertainty Eadlyn feels.

I was very satisfied with the ending of this book and duology, but of course, I want more. I think this is why I find myself re-reading this series every couple of years because the trilogy and duology tell love stories that you can only dream of.