Amazing Women of the Civil War: Fascinating True Stories of Women Who Made a Difference... 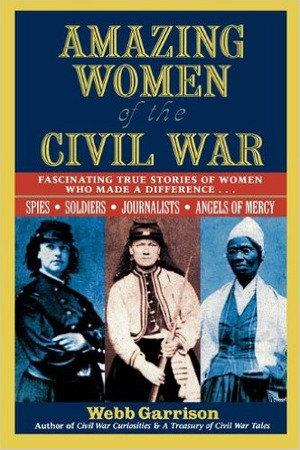 Webb Garrison
The Civil War is most often described as one in which brother fought against brother. But the most devastating war fought on American soil was also one in which women demonstrated heroic deeds, selfless acts, and courage beyond measure. Women mobilized soup kitchens and relief societies. Women cared for wounded soldiers. Women were effective spies. And it is estimated that 300 women fought on the battlefields, usually disguised as men. The most fascinating Civil War women included: -Harriet Tubman, a former slave, who led hundreds of fellow slaves to freedom on the Underground Railroad. -Four hundred women who were seized in Roswell, Georgia, deported to Indiana, and vanished without a trace. -Belle Boyd, the "Sired on the Shenandoah," who at the age of seventeen killed a Union soldier. -"Crazy" Elizabeth Van Lew, who deliberately fostered the impression that she was eccentric so that she could be an effective spy for the North.