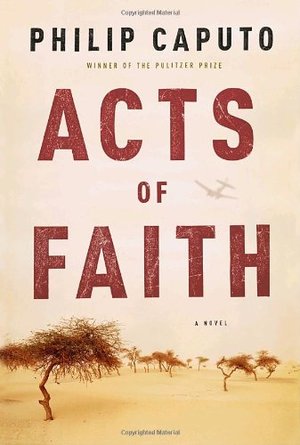 Philip Caputo
Thirty years ago, Pulitzer Prize—winning author and journalist Philip Caputo crossed the deserts of Sudan and Eritrea on foot and camelback, a journey that inspired his first novel, Horn of Africa, and awakened a lifelong fascination with Africa. His travels have since taken him back to Sudan, as well as to Kenya, Somalia, and Tanzania, and from those experiences he has fashioned Acts of Faith, his most ambitious novel. A stunning and timely epic, it tells the stories of pilots, aid workers, missionaries, and renegades struggling to relieve the misery wrought by the civil war in Sudan.The hearts of these men and women are in the right place, but as they plunge into a well of moral corruption for which they are ill-prepared, their hidden flaws conspire with circumstances to turn their strengths–bravery, compassion, daring, and empathy–into weaknesses. In pursuit of noble ends, they make ethical compromises; their altruism curdles into self-righteous zealotry and greed, entangling them in a web of conspiracies that leads, finally, to murder. A few, however, escape the moral trap and find redemption in the discovery that firm convictions can blind the best-intentioned man or woman to the difference between right and wrong.Douglas Braithwaite, an American aviator who flies food and medicine to Sudan’s ravaged south, is torn between his altruism and powerful personal ambitions. His partners are Fitzhugh Martin, a multiracial Kenyan who sees Sudan as a cause that can give purpose to his directionless life, and Wesley Dare, a hard-bitten bush pilot who is not as cynical as he thinks he is and sacrifices all for the woman he loves.They are joined by two strong women: Quinette Hardin, an evangelical Christian from Iowa who liberates slaves captured by Arab raiders and who falls in love with a Sudanese rebel; and Diana Briggs, the daughter of a family with colonial roots in Africa, who believes that her love for her adopted continent might be enough to save it.Pitted against them is Ibrahim Idris ibn Nur-el-Din, a fierce Arab warlord whose obsessive quest for an escaped concubine undermines his faith in the holy war he is waging against Sudan’s southern blacks.In a harsh yet alluring landscape, these and other vividly realized characters act out a drama of modern-day Africa. Grounded in the reality of today’s headlines, Acts of Faith is a captivating novel of human complexity that combines seriousness with all the seductive pleasure of a masterly thriller.