Gunslinger (The Dark Tower), The 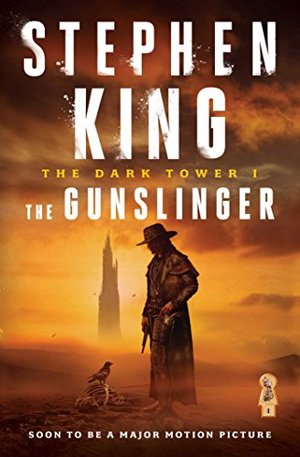 Stephen King
Soon to be a major motion picture starring Matthew McConaughey and Idris Elba “An impressive work of mythic magnitude that may turn out to be Stephen King’s greatest literary achievement” (The Atlanta Journal-Constitution), The Gunslinger is the first volume in the epic Dark Tower Series.A #1 national bestseller, The Gunslinger introduces readers to one of Stephen King’s most powerful creations, Roland of Gilead: The Last Gunslinger. He is a haunting figure, a loner on a spellbinding journey into good and evil. In his desolate world, which mirrors our own in frightening ways, Roland tracks The Man in Black, encounters an enticing woman named Alice, and begins a friendship with the boy from New York named Jake. Inspired in part by the Robert Browning narrative poem, “Childe Roland to the Dark Tower Came,” The Gunslinger is “a compelling whirlpool of a story that draws one irretrievable to its center” (Milwaukee Sentinel). It is “brilliant and fresh…and will leave you panting for more” (Booklist).

Stephan King’s Idea About The Wild West In The Gunslinger

After reading Stephan King’s sci-fi, a western tale called The Gunslinger, it was very enjoyable on a level that is just different than some famous Stephan King tales. Published by Scribner, The Gunslinger was a pretty good book, definitely enjoyable. It is 250 pages long and for a book published in 1982, I would probably say, “Man, this is a sorta old and probably going to be a boring book”, but after I read it I said to myself, “Wow. I wonder where I can find the rest of this series?”

I would recommend the book to people who are big fans of wild west stories. One of the things I really enjoyed about the book was how similar it was to what I would picture in a western story, movie, or show. In many ways, it reminds me of all the western movies my dad got me into when I was young, which was cool. The story reminds me of how the Lone Ranger always has an adventure to go on or a crime to stop. The relationships in this book remind me of Roy Rogers and Bonanza, which I always enjoyed. The personality and characteristics of the main character, Roland, remind of the movie The Outlaw Josey Wales, which my dad showed me. This book is a good story in terms of characters and plot, but it is also an overall good book to be interested in, especially if you are a western fan.

I am a fan of Stephan King’s books and movies. I know this book was one of his first, but when I think of Stephan King in 2019 I generally think horror because that is what I am used to seeing from inspired movies and books by King. Something I did not like about the book was that it was not all that horrifying. It was pretty good but also a sad story. It would have been better if there was a bit more about the backstory of the main character and his friends before he became “The Gunslinger”. Even though there is, however, a little bit of horror, it’s not as much as you would expect from a Stephan King novel if you only know about his more recent works. The way he wrote is impressive and that is the way I do like his stuff to be presented and shown to us. So I would say if someone was thinking about reading a novel by Stephan King for the horror aspect, this would not be the best book to choose, but there is still a chance that it would not be that bad an option. But if you like a classic adventurous and purposeful story, this is the book for you. King is a talented writer, but The Gunslinger just would not account for his popularity as he is now famous for scary stories like It and The Shining.