Between Good and Evil: A Master Profiler's Hunt for Society's Most Violent Predators 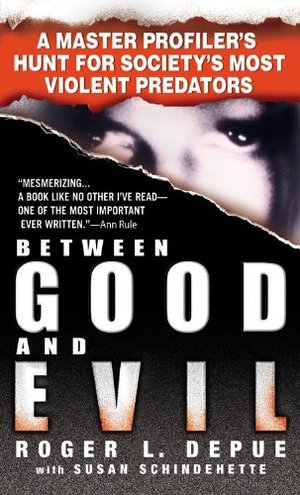 Roger L. Depue
- Roger L. Depue was a mentor to John Douglas, whose book Mindhunter (Scribner, 1995) was a #1 New York Times bestseller, and also to Robert K. Ressler, the author of Whoever Fights Monsters (St. Martin's Press, 1992). - Depue is considered the "godfather of serial killer profilers" and has been quoted and featured in such publications as the New York Times Magazine, The Wall Street Journal, and Vanity Fair. - Depue has been a consultant to Thomas Harris, author of the blockbuster bestsellers The Silence of the Lambs (St. Martin's Press, 1988) and Red Dragon (Putnam, 1981). - In his present position at AGI, the world's most elite forensics think tank, Depue has consulted on both the Martha Moxley and JonBenet Ramsey murder cases. - Available as a Time Warner AudioBook.

@woodylv
Reviewed: 2020-02-14
This was a very interesting read. The author reminded me of several bosses I have had though. He isn't really doing the work but he takes a lot of credit for what his team accomplished.
Item Posts
No posts
© 2020 libib.com / All rights reserved