Beyond Patriarchy: Essays by Men on Pleasure, Power, and Change 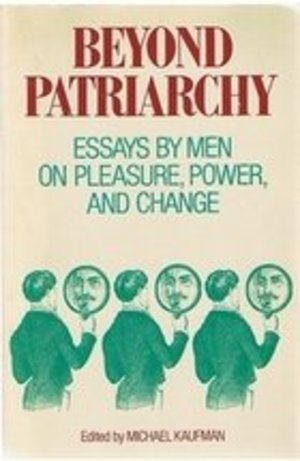 Beyond Patriarchy is a frank, original analysis of patriarchy by men from all walks of life, living on three continents. "As men," writes Michael Kaufman, "we have been challenged to rethink our lives, our relationships, and our assumptions about the world. This book is a reponse to that challenge and an attempt by various men, sympathetic to feminism, to add our own voices to this process of inquiry and reflection." Starting with the basic assumption that the breakdown of the patriarchal system is a good and necessary step toward creating a better society, the contributors examine the origins of male domination, the institutions that perpetuate it, and its manifestation in the thoughts and lives of men. They address the fears men have of living in a non-sexist, non-patriarchal society, suggesting that "maleness" (sex) is confused in many men's minds with "masculinity" (gender) and that what they feel is at stake is their very manhood. Another stumbling block is the idea that men have everything to lose and nothing to gain by feminism. Greater acceptance of the nurturing role of fathers, of gay men, of the expression of emotion by men are a few examples cited as benefits to men. A male feminist perspective is offered on a broad range of issues--from fatherhood to the organization of the workplace to homosexuality, the political structure, and the male role in advertising, sports, and film. Written by men living in Canada, the U.S., France, England, and Australia and coming from a wide variety of backgrounds--from anthropology to physics--the articles included here make an important contribution to feminism and offer insights that are unavailable from the literature written by women.