Strategic Vision for Africa: The Kampala Movement, A 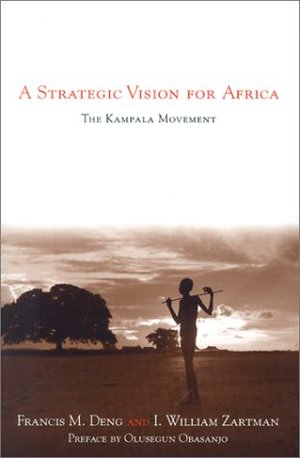 Francis M. Deng, I. William Zartman
Increasingly marginalized since the end of the Cold War, the continent of Africa is struggling to identify both the root causes and possible solutions to the maladies that continue to plague it. The problems read like a laundry list of misrule in the aftermath of decolonization: rampant political corruption, internecine wars, widespread disease, underdevelopment, and economic collapse. In the early 1990s, a group of statesmen, academics, and civil leaders from all over Africa gathered to put together a comprehensive plan to make the continent become less dependent on the rest of the world and prepare it to compete in the new globalizing economy. Those who gathered to write what would come to be known as the Kampala Document envisioned an organization which would succeed where the Organization for African Unity (OAU) had failed. This new organization, the Conference on Security, Stability, Development and Cooperation in Africa (CSSDCA), will provide a forum for discussion of democratization, security issues, and sustainable development. This new book by noted scholars Francis Deng and I. William Zartman provides a "mid-course" appraisal of the progress of the CSSDCA, as well as charting its future in relation to other regional organizations. With a preface by President Olusegun Obasanjo, this book will undoubtedly become an important tool in understanding Africa's present and future. Francis Deng is a nonresident senior fellow in the Foreign Policy Studies program at the Brookings Institution. His books include Masses in Flight: The Global Crisis of Internal Displacement (Brookings, 1998, with Roberta Cohen), The Forsaken People: Case Studies of the Internally Displaced (Brookings, 1998, co-edited with Roberta Cohen). I. William Zartman is Jacob Blaustein Professor of International Organizations and Conflict Resolution and Director of African Studies at the Paul H. Nitze School of Advanced International Studies.