Novice: Summoner: Book One (The Summoner Trilogy), The 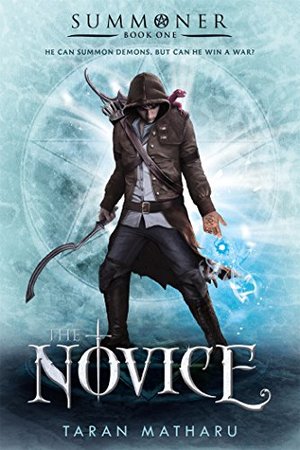 Taran Matharu
He can summon demons. But can he win a war?Fletcher is working as a blacksmith's apprentice when he discovers he has the rare ability to summon demons from another world. Chased from his village for a crime he did not commit, Fletcher must travel with his demon, Ignatius, to an academy for adepts, where the gifted are taught the art of summoning.Along with nobles and commoners, Fletcher endures grueling lessons that will prepare him to serve as a Battlemage in the Empire's war against the savage Orcs. But sinister forces infect new friendships and rivalries grow. With no one but Ignatius by his side, Fletcher must decide where his loyalties lie. The fate of the Empire is in his hands. . . .The Novice by Taran Matharu is book one in the Summoner trilogy, a stunning epic fantasy that started on Wattpad, and has over six million views on the site today.

What comes to mind when you hear the title "The Novice"? This young adult fictional fantasy has character ranging demons to dwarfs,along with a slow begining but later it has you bitting your nails at every turn. This is a great book for you if you love the "Harry  Potter, Eragon, The Managerie, or Ranger's apprentice series. Try it out!