Democracy and Development in Africa 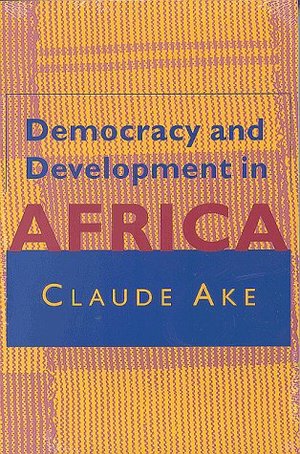 Claude Ake
Despite three decades of preoccupation with development in Africa, the economies of most African nations are still stagnating or regressing. For most Africans, incomes are lower than they were two decades ago, health prospects are poorer, malnourishment is widespread, and infrastructures and social institutions are breaking down.An array of factors have been offered to explain the apparent failure of development in Africa, including the colonial legacy, social pluralism, corruption, poor planning and incompetent management, limited in-flow of foreign capital, and low levels of saving and investment. Alone or in combination, these factors are serious impediments to development, but Claude Ake contends that the problem is not that development has failed, but that it was never really on the agenda. He maintains that political conditions in Africa are the greatest impediment to development.In this book, Ake traces the evolution and failure of development policies, including the IMF stabilization programs that have dominated international efforts. He identifies the root causes of the problem in the authoritarian political structure of the African states derived from the previous colonial entities. Ake sketches the alternatives that are struggling to emerge from calamitous failure--economic development based on traditional agriculture, political development based on the decentralization of power, and reliance on indigenous communities that have been providing some measure of refuge from the coercive power of the central state. Ake's argument may become a new paradigm for development in Africa.