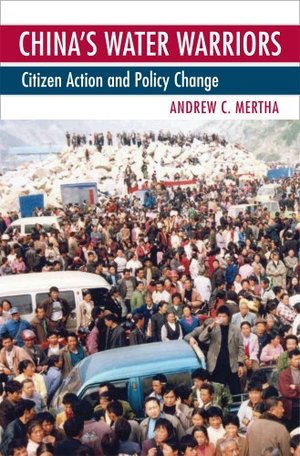 Andrew C. Mertha
Today opponents of large-scale dam projects in China, rather than being greeted with indifference or repression, are part of the hydropower policymaking process itself. What accounts for this dramatic change in this critical policy area surrounding China's insatiable quest for energy? In China's Water Warriors, Andrew C. Mertha argues that as China has become increasingly market driven, decentralized, and politically heterogeneous, the control and management of water has transformed from an unquestioned economic imperative to a lightning rod of bureaucratic infighting, societal opposition, and open protest.Although bargaining has always been present in Chinese politics, more recently the media, nongovernmental organizations, and other activists―actors hitherto denied a seat at the table―have emerged as serious players in the policy-making process. Drawing from extensive field research in some of the most remote parts of Southwest China, China's Water Warriors contains rich narratives of the widespread opposition to dams in Pubugou and Dujiangyan in Sichuan province and the Nu River Project in Yunnan province.Mertha concludes that the impact and occasional success of such grassroots movements and policy activism signal a marked change in China's domestic politics. He questions democratization as the only, or even the most illuminating, indicator of political liberalization in China, instead offering an informed and hopeful picture of a growing pluralization of the Chinese policy process as exemplified by hydropower politics.For the 2010 paperback edition, Mertha tests his conclusions against events in China since 2008, including the Olympics, the devastating 2008 Wenchuan earthquake, and the Uighar and Tibetan protests of 2008 and 2009.