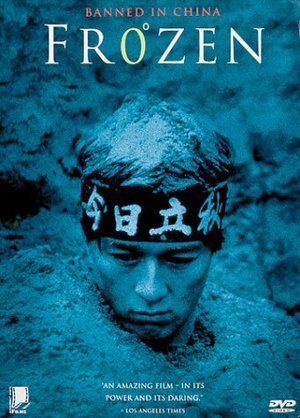 Xiaoshuai Wang
A member of a small group of intellectuals and artists, performs a series of symbolic ritual suicides--burial by earth, water, and fire--on the first day of each season, and plans to publicly end his life for good in a final ice burial. Inspired by a real-life performance-art suicide (according to the opening commentary), Frozen explores a rarely glimpsed youth subculture of post-Tiananmen Square Beijing, and finds a mood of hopelessness. Wang Xiaoshuai's deliberate direction and unadorned shooting style has won accolades for its simplicity and directness, highlighted in two genuine performance-art pieces: the first a stomach churning document of two men eating a bar of soap, and the second the shivering ice burial. It's an effective approach for those scenes, where self-torture becomes a desperate grasp for sensation in a numbing existence, but elsewhere the anger and frustration of the film dissipates in long, rambling discussions and a meandering pace. Part of that style came from necessity: the guerrilla production was shot in secret and smuggled out of the country. The director finished it in Amsterdam and signed it "Wu Ming" (meaning "no one") out of fear of reprisals from the Chinese government. In the years since its release, Wang Xiaoshuai has come forth as the director, but the alias appropriately remains on the prints. A film that gives voice to a generation of alienated young adults desperate to be heard, it remains banned in China. --Sean Axmaker