Atomic Weight of Love: A Novel, The 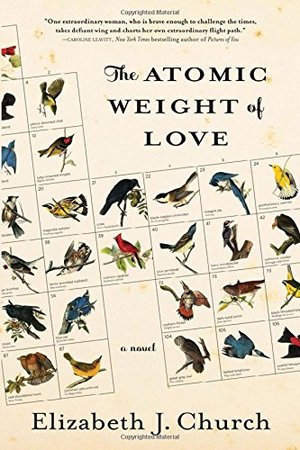 Elizabeth J. Church
In her sweeping debut novel, Elizabeth J. Church takes us from the World War II years in Chicago to the vast sun-parched canyons of New Mexico in the 1970s as we follow the journey of a driven, spirited young woman, Meridian Wallace, whose scientific ambitions are subverted by the expectations of her era. In 1941, at seventeen years old, Meridian begins her ornithology studies at the University of Chicago. She is soon drawn to Alden Whetstone, a brilliant, complicated physics professor who opens her eyes to the fundamentals and poetry of his field, the beauty of motion, space and time, the delicate balance of force and energy that allows a bird to fly. Entranced and in love, Meridian defers her own career path and follows Alden west to Los Alamos, where he is engaged in a secret government project (later known to be the atomic bomb). In married life, though, she feels lost and left behind. She channels her academic ambitions into studying a particular family of crows, whose free life and companionship are the very things that seem beyond her reach. There in her canyons, years later at the dawn of the 1970s, with counterculture youth filling the streets and protests against the war rupturing college campuses across the country, Meridian meets Clay, a young geologist and veteran of the Vietnam War, and together they seek ways to mend what the world has broken. Exquisitely capturing the claustrophobic eras of 1940s and 1950s America, The Atomic Weight of Love also examines the changing roles of women during the decades that followed. And in Meridian Wallace we find an unforgettable heroine whose metamorphosis shows how the women’s movement opened up the world for a whole generation.

@literallymya
Reviewed: 2019-01-14
stayed up late to finish it in mostly one sitting. captivating, beautiful.
Item Posts
No posts
© 2020 libib.com / All rights reserved