10 for 10: Hedley Verity and the Story of Cricket's Greatest Bowling Feat 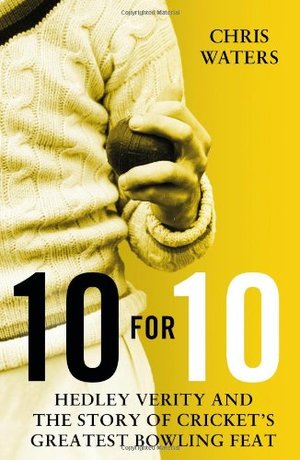 Chris Waters
Hedley Verity was one of Yorkshire and England's greatest cricketers. In a career that ran from 1930 to 1939, the left-arm spin bowler took 1,956 wickets at an average of 14.90. Verity was chiefly responsible for England's only Ashes victory at Lord's in the 20th century, when his 15 wickets helped to win the 1934 Test - 14 of them captured in a single day. And he dismissed the legendary Australian batsman Don Bradman more times than anyone in Test cricket, claiming his wicket on eight occasions - and a record-equalling 10 times in first class cricket. But the high-water mark of Verity's career came during a long-forgotten County Championship match in 1932. On the Headingley ground near his birthplace, Verity returned staggering figures of 10 for 10 against Nottinghamshire - a world record that still stands. Now, for the first time, the story of this amazing game has been told as Chris Waters narrates it in relation to Verity's career - a career that ended with the outbreak of a war in which Verity was tragically killed at the age of 38. Warm and wistful, charming and colourful, 10 for 10: Hedley Verity and the story of cricket's greatest bowling feat honours the history of our summer sport.