At the Hearth of the Crossed Races: A French-Indian Community in Nineteenth-Century Oregon, 1812-1859 (First Peoples: New Directions in Indigenous Studies) 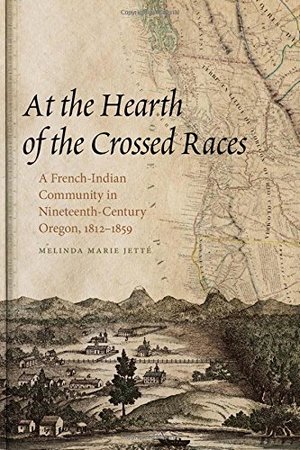 Melinda Marie Jetté
Despite the force of Oregon’s founding mythology, the Willamette Valley was not an empty Eden awaiting settlement by hardy American pioneers. Rather, it was, as Melinda Jetté explores in At the Hearth of the Crossed Races, one of the earliest sites of extensive intercultural contact in the Pacific Northwest. Jetté’s study focuses on the “hearth” of this contact: French Prairie, so named for the French-Indian families who resettled the homeland of the Ahantchuyuk Kalapuyans. Although these families sought a middle course in their relations with their various neighbors, their presence ultimately contributed to the Anglo-American colonization of the region. By establishing farming and husbandry operations in the valley, the French-Indian settlers enhanced the Willamette Valley’s appeal as a destination of choice for the Anglo-Americans who later emigrated to the Pacific Northwest via the Oregon Trail. Upon these emigrants’ arrival, the social space for the people of the “crossed races” diminished considerably, as the Anglo-Americans instituted a system of settler colonialism based on racial exclusion. Like their Native kin, the French-Indian families pursued various strategies to navigate the changing times and Jetté’s study of French Prairie takes on the relationships among all three: the French-Indian families, the indigenous peoples, and the Anglo-American settlers.   With At the Hearth of the Crossed Races, Jetté delivers a social history that deepens our understanding of the Oregon Country in the nineteenth century. This history of French Prairie provides a window into the multi-racial history of the Pacific Northwest and offers an alternative vision of early Oregon in the lives of the biracial French-Indian families whose community challenged notions of white supremacy, racial separation, and social exclusion.