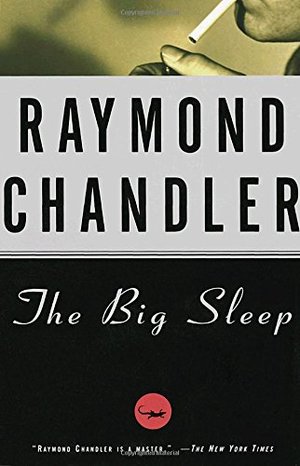 Raymond Chandler
When a dying millionaire hires Philip Marlowe to handle the blackmailer of one of his two troublesome daughters, Marlowe finds himself involved with more than extortion. Kidnapping, pornography, seduction, and murder are just a few of the complications he gets caught up in."Chandler [writes] like a slumming angel and invest[s] the sun-blinded streets of Los Angelos with a romantic presence."--Ross Macdonald

@astuaryprince
Reviewed: 2021-11-10
Great book. An excellently written caper. Chandler manages to never let you quite see what’s coming, but you’re aware that the scaffolding of mystery is there. The prose is drenched in romance. There’s a fair amount of dated homophobia and racism, however. Overall very good.
@smb1702
Reviewed: 2021-04-09

I wanted to read Raymond Chandler's Philip Marlowe series, but I was worried that I might be too influenced by 50 years of watching movies. I was concerned that I might keep picturing Humphrey Bogart and Lauren Bacall, but once I started the novel, the characterization is so well done that my worry now seems silly. Not only are the characters well-written, the novel itself is a joy. It's self-assured yet manages to be surprising. Despite modern sensibilities I felt far less put off by the depictions of women and minorities than I have been in some other literature (though it's important to remember the time in which it was written,) and just as I've come to expect from this era's literature - everyone drinks a lot (that's not a good thing, but it is true.) Even knowing how this story was going to unfold, I was drawn in by the crime, characters and setting, and I could picture every step Marlowe took. There are "broads" and "dames" but the books feel less tawdry than the label "noir" does. I'm working my way through the series, and I will admit the tone wears a bit thin if I read too much without throwing another book or type of book in the mix. That's fine - unlike the characters and their liquor, I will savor each one slowly, imbibing over time.