Bear and the Nightingale (Winternight Trilogy, #1), The 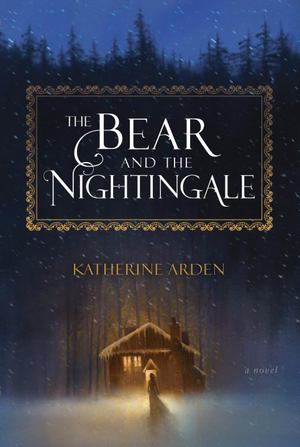 Katherine Arden
A magical debut novel for readers of Naomi Novik's Uprooted, Erin Morgenstern's The Night Circus, and Neil Gaiman's myth-rich fantasies, The Bear and the Nightingale spins an irresistible spell as it announces the arrival of a singular talent with a gorgeous voice. At the edge of the Russian wilderness, winter lasts most of the year and the snowdrifts grow taller than houses. But Vasilisa doesn't mind--she spends the winter nights huddled around the embers of a fire with her beloved siblings, listening to her nurse's fairy tales. Above all, she loves the chilling story of Frost, the blue-eyed winter demon, who appears in the frigid night to claim unwary souls. Wise Russians fear him, her nurse says, and honor the spirits of house and yard and forest that protect their homes from evil. After Vasilisa's mother dies, her father goes to Moscow and brings home a new wife. Fiercely devout, city-bred, Vasilisa's new stepmother forbids her family from honoring the household spirits. The family acquiesces, but Vasilisa is frightened, sensing that more hinges upon their rituals than anyone knows. And indeed, crops begin to fail, evil creatures of the forest creep nearer, and misfortune stalks the village. All the while, Vasilisa's stepmother grows ever harsher in her determination to groom her rebellious stepdaughter for either marriage or confinement in a convent. As danger circles, Vasilisa must defy even the people she loves and call on dangerous gifts she has long concealed--this, in order to protect her family from a threat that seems to have stepped from her nurse's most frightening tales. Praise for The Bear and the Nightingale "Vasya [is] a clever, stalwart girl determined to forge her own path in a time when women had few choices."--The Christian Science Monitor "Stunning . . . will enchant readers from the first page. . . . with an irresistible heroine who wants only to be free of the bonds placed on her gender and claim her own fate."--Publishers Weekly (starred review) "Utterly bewitching . . . a lush narrative . . . an immersive, earthy story of folk magic, faith, and hubris, peopled with vivid, dynamic characters, particularly clever, brave Vasya, who outsmarts men and demons alike to save her family."--Booklist (starred review) "Arden's supple, sumptuous first novel transports the reader to a version of medieval Russia where history and myth coexist."--Kirkus Reviews (starred review) "Radiant . . . a darkly magical fairy tale for adults, [but] not just for those who love magic."--Library Journal "An extraordinary retelling of a very old tale . . . A Russian setting adds unfamiliar spice to the story of a young woman who does not rebel against the limits of her role in her culture so much as transcend them. The Bear and the Nightingale is a wonderfully layered novel of family and the harsh wonders of deep winter magic."--Robin Hobb "A beautiful deep-winter story, full of magic and monsters and the sharp edges of growing up."--Naomi Novik "Haunting and lyrical, The Bear and the Nightingale tugs at the heart and quickens the pulse. I can't wait for her next book."--Terry Brooks "The Bear and the Nightingale is a marvelous trip into an ancient Russia where magic is a part of everyday life."--Todd McCaffrey "Enthralling and enchanting--I literally couldn't put it down."--Tamora Pierce