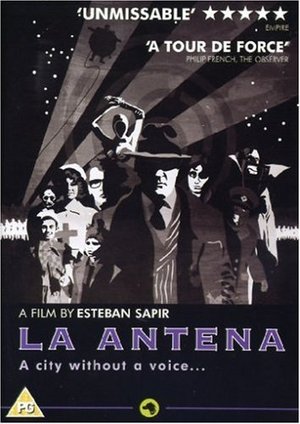 Esteban Sapir
United Kingdom released, PAL/Region 2 DVD: it WILL NOT play on standard US DVD player. You need multi-region PAL/NTSC DVD player to view it in USA/Canada: LANGUAGES: Spanish ( Dolby Digital 5.1 ), English ( Subtitles ), SPECIAL FEATURES: Interactive Menu, Scene Access, Trailer(s), SYNOPSIS: Writer/director Esteban Sapir offers a cautionary tale of media control in this highly stylized thriller that draws on film noir and German Expressionism to tell the tale of a society that has literally lost its ability to speak after bowing to the constant barrage of broadcasts and products of the omnipresent Mr. TV (Alejandro Urdapilleta). It is year X in the City Without a Voice, and the only individual who retains the ability to convey her thoughts through speech is the mysterious Voice (Florencia Raggi). A faceless singer whose soothing songs are heard on one of Mr. TV's most popular programs, The Voice comes under threat when Mr. TV teams with Dr. Y (Carlos Pineiro) to take total control of the thrush and use her vocal chords to pursue their own nefarious plan. Their devious scheme soon hits an unexpected hitch, however, when it is revealed that The Voice's son Tomas (Jonathan Sandor), who was born without eyes, also possesses the power of speech. Soon after The Voice is kidnapped by Mr. TV and Dr. Y, The Inventor (Rafael Ferro) races to Tomas' rescue and sets into motion a plan designed to end the dubious reign of the media-savvy Mr. TV. With the help of The Inventor's devoted daughter Ana (Sol Moreno) and faithful wife The Nurse (Julieta Cardinali), The Inventor sets into motion a plan to rescue The Voice before Mr. TV achieves complete mind control over the population. Little does The Inventor realize, however, that Mr. TV's evil henchman Mouseman (Raul Hochman) is hot on his trail and determined to see his boss' plan succeed at any cost. ...The Aerial ( La Antena )