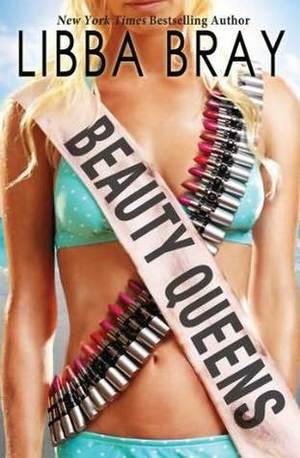 Libba Bray
From bestselling, Printz Award-winning author Libba Bray, the story of a plane of beauty pageant contestants that crashes on a desert island.Teen beauty queens. A "Lost"-like island. Mysteries and dangers. No access to emall. And the spirit of fierce, feral competition that lives underground in girls, a savage brutality that can only be revealed by a journey into the heart of non-exfoliated darkness. Oh, the horror, the horror! Only funnier. With evening gowns. And a body count.

@kirbyb
Reviewed: 2021-02-04
3.62
@spirit0
Reviewed: 2017-01-29
Usually I’m scared away by satire because it’s so rarely done well, and can be used as an excuse to reinforce the status quo in the guise of progressive social commentary. But I had no fear picking up Libba Bray’s _Beauty Queens_ after it was described to me as hilarious surrealist satire of _Lord of the Flies_ explicitly tackling the corruption capitalism encourages and the danger of stereotypes based on race or gender. In it, a plane of beauty pageant contestants from each state crashes on a tropical island, leaving the survivors to fend for themselves.

Unlike _Lord of the Flies_, the girls don’t let their differences or the fact that they’re would-be competitors stop them from banding together to survive. Whereas the boys in Golding’s classic lose their civilized selves to the wildness of the island, the girls in _Beauty Queens_ discover that they change for the better—“maybe girls _need_ an island to find themselves. Maybe they need a place where no one’s watching them so they can be who they really are.” Between all these serious postulations there’s plenty of jokes poking fun at reality TV, pop music (everyone’s favorite boy band is Boyz Will B Boyz, despite the rising popularity of Hot Vampire Boyz), and infomercials. The audiobook enhances the experience by adding things like music to the commercial reads, and Bray’s stellar reading won her the Audie Award for Best Narration by the Author.