Age of Myth (The Legends of the First Empire, #1) 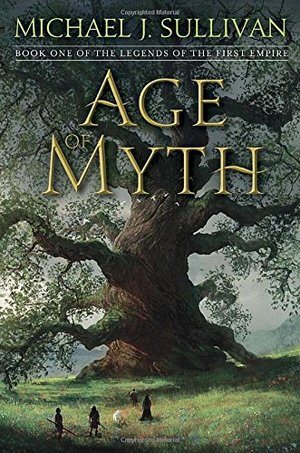 Michael J. Sullivan
Michael J. Sullivan's trailblazing career began with the breakout success of his Riyria series: full-bodied, spellbinding fantasy adventures whose imaginative scope and sympathetic characters won a devoted readership and comparisons to fantasy masters Brandon Sanderson, Scott Lynch, and Tolkien himself. Now, Sullivan's stunning hardcover debut, Age of Myth, inaugurates an original five-book series--and one of fantasy's finest next-generation storytellers continues to break new ground.Since time immemorial, humans have worshipped the gods they call Fhrey, truly a race apart: invincible in battle, masters of magic, and seemingly immortal. But when a god falls to a human blade, the balance of power between men and those they thought were gods changes forever. Now, only a few stand between humankind and annihilation: Raithe, reluctant to embrace his destiny as the God Killer. Suri, a young seer burdened by signs of impending doom. And Persephone, who must overcome personal tragedy to lead her people.The Age of Myth is over; the time of rebellion has begun.

@amusingnickname
Reviewed: 2021-05-30
I don't rate beta reads, they tend to change before being released (you know being beta and all).. What I will say, that if the final release is similar or better than this version (the 2nd), it will definitely be getting 5 stars. I'll update this when I see the final result.

Michael J Sullivan fans, hold on to your hats, cause this is going to rock your socks.. I see the future... I think I might be a mystic! Get me some chicken bones! See this is what happens when you read 5 hours straight cause you can't put the book down.. You think your a Mystic.. I might even know I'm one..