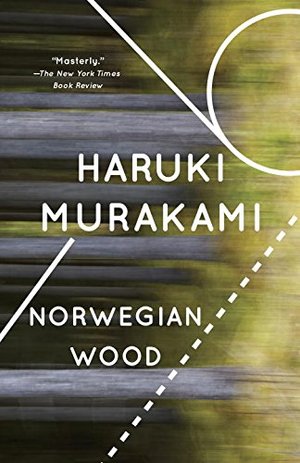 Haruki Murakami
This stunning and elegiac novel by the author of the internationally acclaimed Wind-Up Bird Chronicle has sold over 4 million copies in Japan and is now available to American audiences for the first time.  It is sure to be a literary event.Toru, a quiet and preternaturally serious young college student in Tokyo, is devoted to Naoko, a beautiful and introspective young woman, but their mutual passion is marked by the tragic death of their best friend years before.  Toru begins to adapt to campus life and the loneliness and isolation he faces there, but Naoko finds the pressures and responsibilities of life unbearable.  As she retreats further into her own world, Toru finds himself reaching out to others and drawn to a fiercely independent and sexually liberated young woman.A poignant story of one college student's romantic coming-of-age, Norwegian Wood takes us to that distant place of a young man's first, hopeless, and heroic love.

@empcle
Reviewed: 2019-07-19
The writing was superb. Descriptions were so good I could see, taste, feel what the author was describing. But, since I’m older and so over self-analysis, I got tired of the teenage angst and self-analysis. The ending was a big letdown. I had to rewind the audio just to make sure I heard right.
@ellamc
Reviewed: 2019-03-28

“That song can make me feel so sad,” said Naoko. “I don't know, I guess I imagine myself wandering in a deep wood. I'm all alone and it's cold and dark, and nobody comes to save me.”

I always confuse this Haruki Murakami with Kazuo Ishiguro's Never Let Me Go. The very pastoral feeling to a lot of it, the woods, the walking, the solitary Toru Watanabe and his broken heart... I realize the stories are dissimilar, but this is not your average Murakami fare. It was one of his earlier works, and while nothing is wrong with it in particular, it's just so different from everything else I've read from him that it really is not the stuff one imagines when reading Murakami. I've seen it suggested so many times as a first read, but I doubt you could know if you'd like much else after reading this because it is so different.

Putting that to the side, I wondered what was making all of these tragic events happen. I sort of hoped for magic, which we do get a hint of at the very end, but not really. I also wondered where our hero's family was. All of the characters in the novel are unmoored - floating around in the world without a tether. The Beatles song from which it takes the title is perfectly suited. "I once had a girl, or should I say she once had me." And the jangly guitars along with the beat belie the sad story the lyrics tell. That's how this book feels. Surrounded by sex and funny characters/scenes, tragedy takes over everyone, characters are alone - wandering in the wilderness, as it were, and while I wouldn't suggest this book could tell anyone if they'd like any other Murakami novel, I think it's still worth a read. It stayed with me for a long time, in detail.

(I've never seen the movie - or for that matter, any of the movies made from his books - anyone have thoughts on this one?)