Blood of the Hydra (Elementals # 2), The 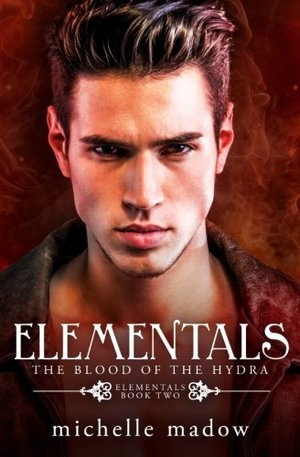 Michelle Madow
A demigod who can kill with a touch. It’s an ability that must be kept secret from everyone—even from those trusted most.Finding out that she was a witch was strange enough, but now Nicole must face the realization that she has the rare power to kill with just a touch. No one can know her secret — not even Blake, who she’s had undeniable chemistry with since first moving to town.Now Nicole, Blake, and the three others with elemental powers must stop a series of monsters that they previously believed to be dead from rising once again and destroying the mortal world. The creatures they face on this journey will be more dangerous than anything they’ve encountered yet. Will they all survive the quest? And how long will it be until Nicole is forced to use her ability to kill in front of everyone, revealing the true darkness of her powers?Find out in The Blood of the Hydra, and join the Elementals on their quest to save the world – or die trying.

This is the sequel to the Elementals series. There are five books total in the series. I enjoyed this book. It was interesting and it moved at a nice pace. This story helped develop some more about the main characters. The writing style itself is directed towards a younger audience and it does read that way. I did find some typos and grammatical errors but not a lot to drive me crazy. This book surrounds their first real big mission to help them on their journey to save the world from the "eventual" release of the Titans. I enjoyed it and would recommend the series. One thing i really enjoy about this series so far is that it claims to be a story based on characters that have elemental control and lives within mythology. And the book actually displays both of these characteristics nicely. It actually delivers on the claims. I am looking forward to see how this adventure continues to play out.