Sharing Our Wisdom: A Collection of Presentations by People Within the Autism Spectrum 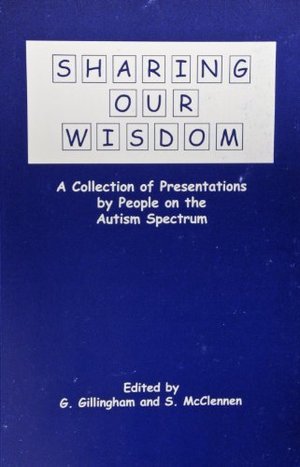 G.; McClennen, S. [Editors] Gillingham
A Review by Anne Carpenter This book is a compilation of presentations done at different conferences from 1996 to 2003 by individuals on the autism spectrum. They focus on advocacy and full inclusion in the community instead of the "cure the disease" model and attitude of pity that is currently at play. Published by Autism National Committee, it spotlights the feelings that individuals on the autism spectrum have when they are overwhelmed by too much sensory stimulation, cannot communicate their needs, and cannot control their bodies the way they want to. When reading these wonderfully insightful essays, one can feel the palpable sense of frustration that the writers have when trying to manipulate their bodies in the way that they need to for communication and for everything else. Many of the authors use facilitated communication, which has opened doors of opportunity for them. Several themes run through this stellar collection of presentations: abuse, the need for alternative communication, and the desperate need to be accepted as a person in one?s own right. In each presentation, the individual tells what it was like to have autism in childhood, then in adolescence and adulthood, when life would become much more difficult because of the lack of services and limited job opportunities. Some of the people in this book are older, in their fifties and sixties, so they have grown up in a society that did not accept people with disabilities. Several of the contributors have been in institutions. They document the damage that institutionalization and the excessive use of medications, such as the older neuroleptics, have done to them physically and psychologically. Other aspects of life on the Spectrum include employment, dealing with other overlapping conditions such as OCD and anxiety, imagination, and the very troubling notion of what it would be like to be "cured" of autism.