Democracy in the Making: How Activist Groups Form (Oxford Studies in Culture and Politics) 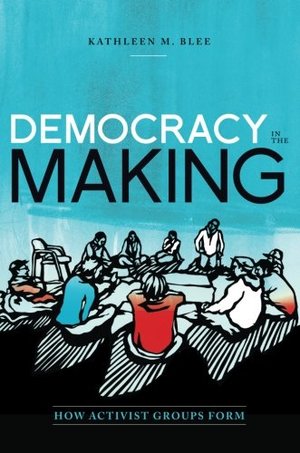 Kathleen M. Blee
Winner of the 2012 ARNOVA Outstanding Book in Nonprofit and Voluntary Action Research Award2013 Charles Tilly Award for Best Book from the American Sociological Association Section on Collective Behavior and Social Movements"Democracy in the Making offers a marvelous synthesis of sociological acumen and hope. Kathleen Blee finds that while social activists often narrow their visions of doable social change, they also can learn together and take surprising new directions with unpredictable results. A wide range of activists will recognize themselves in this book's wonderfully fine-grained portraits of politics at the grassroots."-Paul Lichterman, author of Elusive Togetherness: Church Groups Trying to Bridge America's Divisions"This book is an enormous breath of fresh air in an area that often recycles concepts and perspectives. Blee offers a strikingly original approach to grassroots activism that will substantially reorient research in collective action and social movements."-Marc W. Steinberg, Associate Professor of Sociology, Smith CollegeWith civic engagement commonly understood to be on the decline and traditional bases of community and means of engagement increasingly fractured, how do people become involved in collective civic action? How do activist groups form? What hampers the ability of these groups to invigorate political life, and what enables it? Kathleen Blee's groundbreaking new study provides a provocative answer: the early times matter. By following grassroots groups from their very beginnings, Blee traces how their sense of possibility shrinks over time as groups develop a shared sense of who they are that forecloses options that were once open. At the same time, she charts the turning points at which options re-open and groups become receptive to change and reinvention. Based on observing more than sixty grassroots groups in Pittsburgh for three years, Democracy in the Making is an unprecedented look at how ordinary people come together to change society. It gives a close-up look at the deliberations of activists on the left and right as they work for animal rights, an end to the drug trade in their neighbourhood, same-sex marriage, global peace, and more. It shows how grassroots activism can provide an alternative to civic disengagement and a forum for envisioning how the world can be transformed. At the same time, it documents how activist groups become mired in dysfunctional and undemocratic patterns that their members dislike, but cannot fix.By analyzing the possibilities and pitfalls that face nascent activist organizations, Blee reveals how critical early choices are to the success of grassroots activism. Vital for scholars and activists alike, this practical yet profound study shows us, through the examples of both groups that flourish and those that flounder, how grassroots activism can better live up to its democratic potential.