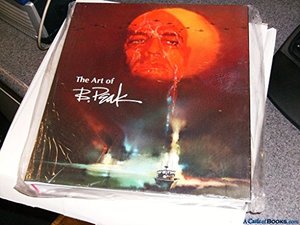 Thomas Peak
For the first time, a comprehensive oversize 380 page coffee table book on the Life and Art of Bob Peak. The book includes over 600 images of works spanning a forty year career with many never before seen illustrations along with his many iconic illustrations for the Movies, Major Periodicals, National Ad Campaigns, Time Magazine Covers, Fashion Advertising, Sports Advertising and more. Bob Peak came on the New York Advertising Art Scene in the early 1950's. He went on to become one of the most prolific illustrators of the 21st century. His artistic vision represented a bridge between the era of Norman Rockwell and Coby Whitmore, with its emphasis on technique, to more direct ways of making pictures, greater use of line, and a more startling, bolder palette. In 1961 he was named "Artist of the Year" by the Artist Guild of New York. In 1977 he was inducted into the prestigious New York Society of Illustrators Hall of Fame. In 1992 after over 100 Movie Campaigns including his iconic images for such films as, My Fair Lady, Camelot, Star Trek, and Apocalypse Now, he was awarded the Lifetime Achievement Award by the Hollywood Reporters for his contribution to the film industry.