Girl on the Train: A Novel, The 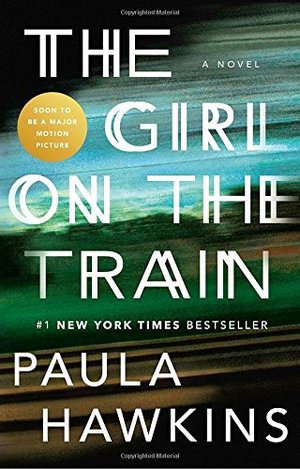 Paula Hawkins
The #1 New York Times Bestseller, USA Today Book of the Year, soon to be a major motion picture.   The debut psychological thriller that will forever change the way you look at other people's lives.   “Nothing is more addicting than The Girl on the Train.”—Vanity Fair “The Girl on the Train has more fun with unreliable narration than any chiller since Gone Girl. . . . [It] is liable to draw a large, bedazzled readership.”—The New York Times   “Marries movie noir with novelistic trickery. . . hang on tight. You'll be surprised by what horrors lurk around the bend.”—USA Today   “Like its train, the story blasts through the stagnation of these lives in suburban London and the reader cannot help but turn pages.”—The Boston Globe “Gone Girl fans will devour this psychological thriller.”—People      EVERY DAY THE SAME Rachel takes the same commuter train every morning and night. Every day she rattles down the track, flashes past a stretch of cozy suburban homes, and stops at the signal that allows her to daily watch the same couple breakfasting on their deck. She’s even started to feel like she knows them. Jess and Jason, she calls them. Their life—as she sees it—is perfect. Not unlike the life she recently lost. UNTIL TODAY And then she sees something shocking. It’s only a minute until the train moves on, but it’s enough. Now everything’s changed. Unable to keep it to herself, Rachel goes to the police. But is she really as unreliable as they say? Soon she is deeply entangled not only in the investigation but in the lives of everyone involved. Has she done more harm than good?

Seems stupid to write a review of a book that everyone and their mother has read, but I'ma do it anyway.

I bought this early on the strength of a review, read half & then apparently forgot to finish it. My local library's reading challenge for January includes reading a book made into a movie, and I was a bit shocked to see this one in my Kindle, so I started again from the beginning, having no clue what I'd read before, and I finished it in a couple days.

Turns out, The Girl on the Train wasn't half bad. It's not the best I've ever read, best I bought in 2015 or even the best one I've read this month. Nonetheless, it's a decent mystery with a nice fake-out or two, and I love an unreliable narrator. I usually love a character that everyone in the book hates, unless she makes me indifferent to her, which came very close to happening here. If I could've rooted more for Rachel, I might have been more invested. Oh well. Still an OK read.

Now two real quibbles: For all the women in it, it sure doesn't pass the Bechdel or any other feminist test I'm aware of. In fact, the women in this book are universally jealous, petty and horrid to each other -- even the so-called friends and especially where men are concerned. Hell, even the policewoman isn't very nice to other women. Grown women being so angry at each other for a man's infidelity or lack of trust, argh -- that time needs to pass from books, right now. I'm tired of watching or reading about these women. I don't know women like this anymore, and I don't like them in books either. It's immature at best, pathetic and gross at most.

Quibble number two is the word "literature" used to market this one. That word is supposed to mean something, and it's not topping the best seller lists. That's popularity and it's great, but it's not the same as literary fiction. Everyone expects a certain originality and quality to the writing that will make it stand the test of time when something is marketed to me as "literary fiction." Though maybe more people will try the literary word if they think it's all like this? Anyway, genre fiction can be literature. There are some wonderful works of literary fiction that are psychological thrillers or fantasy, mystery, western, horror, whatever. This isn't one of them. It's an indulgence, a yummy treat, fun read, relaxing read with real suspense at times. I'll offer a bet right now that this will not end up part of any literary canon. (view spoiler)

Literature definitions: "writings having excellence of form or expression and expressing ideas of permanent or universal interest" or "written works, especially those considered of superior or lasting artistic merit." I'm not sure this little treat fits there. Again, I point out that I'd read half of this two years ago and remembered zilch about it. If my Kindle hadn't had a bookmark and a "last place" marker, I would've sworn I didn't 1) own the book and 2) ever open it.

Despite these quibbles, it was believable good entertainment. I'm not upset I took the time to read it.

It's not quite Gone Girl, but still a page turner and a quality thriller. I did sort of figure it out midway through which ruined some of the suspense.