Little Crow: Leader of the Dakota 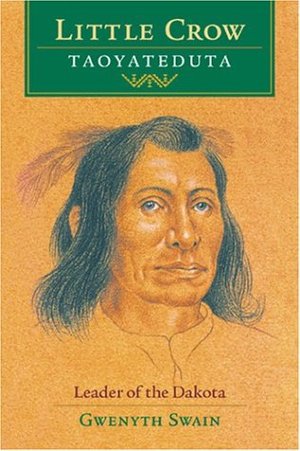 Gwenyth Swain
The Plains Indian Wars of the nineteenth century garnered enduring fame for certain Indian leaders, their names echoing powerfully even today: Sitting Bull, Crazy Horse, Red Cloud. Just as significant but less often mentioned is Taoyateduta, known to whites as Little Crow, the reluctant leader of Dakota warriors during the U.S.Dakota War of 1862, the opening salvo of the U.S.-Indian Wars. In this carefully researched biography of the Dakota leader, the first ever written for children, author Gwenyth Swain presents a compelling portrait of the leader, warrior, and politician at the centre of the Dakota War of 1862. Beginning with Taoyatedutas childhood along the Mississippi River near present-day St. Paul, this biography explores his life in the Big Woods, his wanderings west from the Mdewakanton Dakotas traditional home, his leadership of his people when they were forced to sign over their land to white settlers, and his role during the war of 1862.Hemmed in on a narrow reservation, frustrated by broken treaties, angered by dishonest agents and traders, and nearly starved because of crop failures and late annuity payments, Dakota Indians attacked white settlers living on the Indians former homelands in south-western Minnesota. Taoyateduta agreed to lead the battles, knowing that the U.S. governments response would be swift and terrible. In retribution for the thirty-eight-day war, thirty-eight Dakota men were hanged, thousands were imprisoned, and the Dakota people were expelled from the state. Taoyatedutas story brings to life the painful experience of the Dakota as they lost their land and their livelihood -- and as some chose to adopt white ways while others fought back, with disastrous consequences. Little Crow: Leader of the Dakota offers a clear and accessible account of both the man who led the Dakota into war and the causes behind that wrenching conflict. For ages 9+.