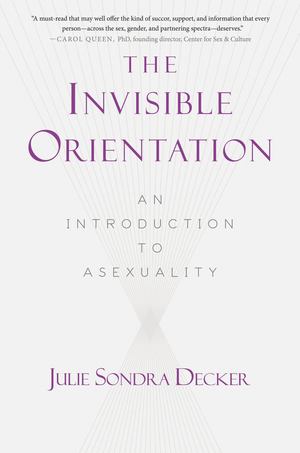 Julie Sondra Decker
What if you aren't attracted to anyone? This Lambda Award Finalist is an overdue look at the least understood part of the sexual identity spectrum. Most people believe that everyone wants sex and experiences sexual desire. But that's why asexual individuals are left out, marginalized, and made invisible by what most perceive as an incomprehensible orientation. While awareness and understanding has increased when it comes to gay, trans, and bisexual people, asexuality remains a mystery to many, even those who are experiencing it. When an asexual person finally comes out, alarming reactions commonly follow: loved ones dismiss it, or fear that an asexual person is psychologically damaged, or suffering from abuse. Critics confront the asexual people with accusations of following a fad, hiding homosexuality, or making excuses for romantic failures. All of this contributes to a discouraging master narrative that there is no such thing as "asexual." The Invisible Orientation outlines what asexuality is, counters misconceptions, provides resources, and puts asexual people's experiences in context as they move through a highly sexualized world. Featuring the varied and personal stories of asexual people, and information on what it means for their relationships, The Invisible Orientation "shines a much-needed light on an experience that's far more common than most people realize"(Charlie Glickman, PhD).   * Foreword Reviews' INDIEFAB Book of the Year Award Finalist in Family & Relationships * Independent Publisher Book Awards (IPPY) Silver Medal in Sexuality/Relationships * Next Generation Indie Book Awards Winner in LGBT