Being Alive and Having to Die: The Spiritual Odyssey of Forrest Church 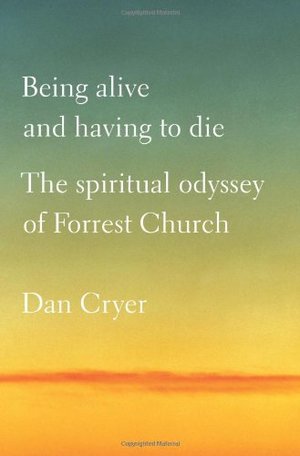 Dan Cryer
One of the year's Top Ten Books on Religion and Spirituality (Booklist), Being Alive and Having to Die is the story of the remarkable public and private journey of Reverend Forrest Church, the scholar, activist, and preacher whose death became a way to celebrate life.  Through his pulpit at the prestigious Unitarian Church of All Souls in New York, Reverend Forrest Church became a champion of liberal religion and a leading opponent of the religious right. An inspired preacher, a thoughtful theologian and an eloquent public intellectual, Church built a congregation committed to social service for people in need, while writing twenty five books, hosting a cable television program, and being featured in People, Esquire, New York Magazine, and on numerous national television and radio appearances.   Being Alive and Having to Die works on two levels, as an examination of liberal religion during the past 30 years of conservative ascendancy, and as a fascinating personal story. Church grew up the son of Senator Frank Church of Idaho, famous for combating the Vietnam War in the 1960s and the CIA in the 1970s.  Like many sons of powerful fathers, he rebelled and took a different path in life, which led him to his own prominence. Then, in 1991, at the height of his fame, he fell in love with a married parishioner and nearly lost his pulpit. Eventually, he regained his stature, overcame a long-secret alcoholism, wrote his best books–and found himself  diagnosed with terminal cancer. His three year public journey toward death brought into focus the preciousness of life, not only for himself, but for his ministry. Based on extraordinary access to Church and over 200 interviews with family, friends, and colleagues, Dan Cryer bears witness to a full, fascinating, at time controversial life. Being Alive and Having to Die is an honest look at an imperfect man and his lasting influence on modern faith.